Boston Offers Bouquets to Tom Brady and Disdain to the Patriots 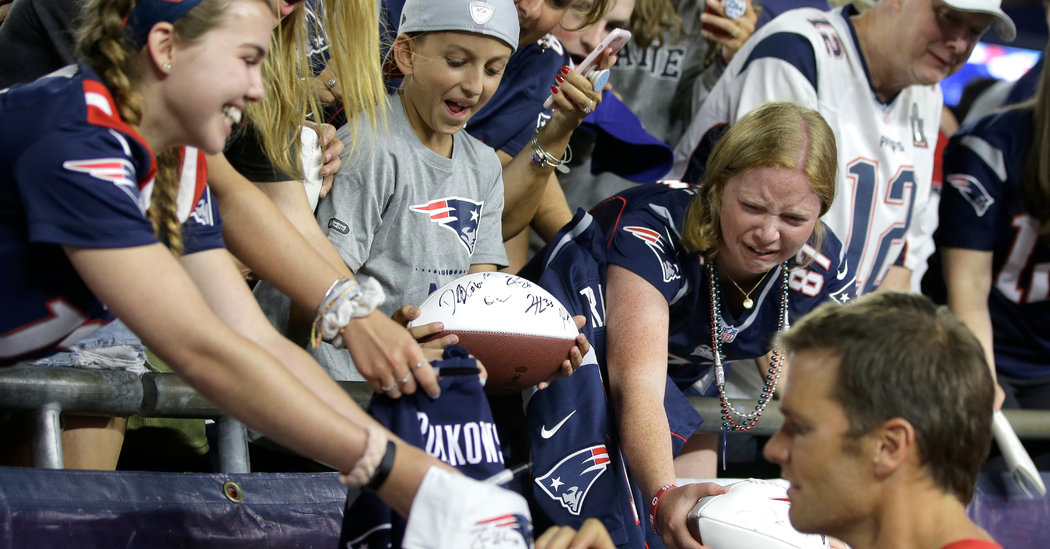 Boston Offers Bouquets to Tom Brady and Disdain to the Patriots

On Sept. 23, 2001, he gathered with friends in front of a TV to watch a Patriots home game against the Jets.

Drew Bledsoe, the Patriots’ beloved quarterback at the time, was knocked out of the game by an injury and when a relatively unknown backup jogged out to replace Bledsoe, Field joked to his worried friends, “Let the Tom Brady era begin.”

The remark was brushed off as another example of Field’s eccentric humor. After all, few New England fans even knew who Tom Brady was at the time. But never were more prophetic words uttered in the world of sports.

The Tom Brady era was far more successful, and lasted far longer, than Field could ever have imagined: six Super Bowl titles for a franchise that had never won one before, nine A.F.C. championships, 17 A.F.C. East crowns and three Most Valuable Player Awards.

“The Brady era was nothing more than the universe realigning after 40 years of some of the worst football ever played by the New England Patriots,” Field said on Wednesday. “So we’re back to even now, as far as I’m concerned.”

The era ended unceremoniously with a combination of sorrow and anger on Tuesday morning when Brady, 42, announced through social media that he was leaving the Patriots after 20 incomparable years.

“My children were born and raised here,” he wrote, “and you always embraced this California kid as your own.”

The region was already grappling with the loss of Mookie Betts, the Red Sox outfielder who was traded to the Los Angeles Dodgers last month. Betts, 27, was not only the best player on the Red Sox, but arguably the most popular as well. Last week, race organizers postponed the Boston Marathon, an annual rite of spring in the city, until September because of mounting concerns about the coronavirus pandemic.

Then came the announcement from a cherished athlete whose success in the area is surpassed only by Bill Russell of the Celtics.

“It’s really different and far more significant than Mookie leaving,” said Marc Bertrand, the co-host of a popular Boston radio show on 98.5 The Sports Hub. “Brady leaving is about the emotional attachment for everything that has happened. Mookie leaving was about everything that could happen in the future.”

All week Bertrand, who grew up in Quincy, Mass., just outside Boston, served — along with his co-host, Scott Zolak, a former Patriots quarterback — as a kind of therapeutic sounding board for masses of distraught Patriots and Brady fans.

He estimated that over the last two days, about 75 percent of callers to his show sided with Brady over the Patriots. One of them said it would take two years for him to rediscover his devotion to the team.

Another angry caller to The Sports Hub said she hoped the Patriots go winless next year, and before long someone had placed flowers at the front door of Brady’s TB12 Performance & Recovery Center on Boylston Street in Boston. The man told the city’s Channel 25 that he lives in the area and was “pretty torn up,” about Brady leaving and “wanted to pay my respects.”

Normally March 17 is a special day of celebration for Boston, its Irish history highlighted by the annual St. Patrick’s Day parade and surrounding festivities. But the parade was canceled and bars and restaurants were closed because of the coronavirus outbreak, leaving the Brady talk to dominate the airwaves and social media.

“It was a total downer,” Bertrand said. “But in a strange way, it took people’s minds off of everything else that is going on. A lot of people forgot that yesterday was even St. Patrick’s Day, and obviously it’s a huge holiday here.”

Like cities across the globe, all of Boston’s promising sports teams have been shuttered because of the outbreak. The Bruins had the most wins in the National Hockey League, and fans had been optimistic about a second consecutive trip to the Stanley Cup finals. The Boston Celtics had the third-best record in the N.B.A.’s Eastern Conference when that league halted operations last week in response to the outbreak.

In an eerie coincidence, Brady’s Patriots career began in the throes of one national crisis (he took over on the first N.F.L. Sunday after the terrorist attacks of Sept. 11) and ended in the grips of another.

His first Super Bowl win, on Feb. 3, 2002, ended a 16-year championship drought in the region and ushered in an era during which Boston teams have won 12 titles and became known as the city of champions.

Now, everyone is left to wonder what the next era will look like, while fans like Field, who now lives in Brooklyn, savor the two decades of memories since that California kid jogged on to the field.

“People say, ‘You guys in Boston have it pretty good,’” Field explained. “But I was born in 1963. I watched the Patriots lose to the Miami Dolphins, 51-0, for 25 years before anything good ever happened.”