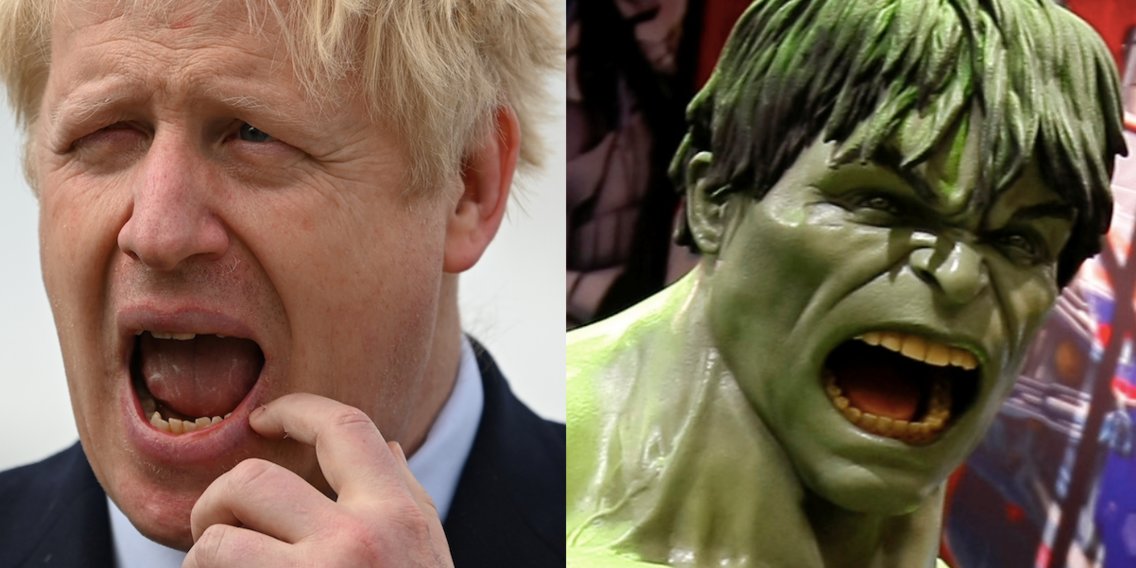 Boris Johnson has been labeled “Trumpian” and “infantile” by a senior European Union figure after the United Kingdom’s prime minister compared Britain leaving the EU to Hulk smashing out of his chains.

Ahead of his meeting on Monday with European Commission President Jean-Claude Juncker, the UK prime minister told the Mail on Sunday newspaper that the country would break out of the “manacles” of the EU under his leadership, adding that “the madder Hulk gets, the stronger Hulk gets.”

Johnson has insisted that he will take the UK out of the EU by the end of October, with or without a withdrawal deal, despite members of Parliament passing a law which could compel him to seek a third delay to Brexit.

Read more: Boris Johnson could soon be forced to resign as prime minister and make way for Jeremy Corbyn

Johnson’s comparison was described by one senior EU figure as “infantile.”

“Is the EU supposed to be scared by this? The British public impressed? Is this Boris Johnson whistling in the dark?”

“It all makes it look like it’s a bit of a joke,” the source told the Guardian.

“We are talking about something extremely serious. The consequences of no deal will be extremely serious and it looks like this is being treated as a game in which you are the hero sort of story rather than [dealing] with real lives.”

Johnson’s comments also drew the ire of Mark Ruffalo, who plays Hulk in the Avengers films.

“Boris Johnson forgets that the Hulk only fights for the good of the whole,” Ruffalo tweeted alongside an image of the Mail on Sunday front page.

“Mad and strong can also be dense and destructive. The Hulk works best when he is in unison with a team, and is a disaster when he is alone. Plus…he’s always got Dr. Banner with science and reason.”

Brexit Secretary Stephen Barclay also attracted ridicule for remarks comparing Johnson’s handling of Brexit to the Hulk. He said on Sunday that the fictional superhero was “a winner and extremely popular.”

Johnson asks Juncker to meet him in the middle

Johnson will on Monday ask Juncker to “meet him halfway” on Brexit, according to the Sun Newspaper.

A UK government source told the newspaper that Johnson will ask the European Commission President to give ground on their opposition to removing the controversial Northern Ireland backstop from the withdrawal agreement.

Johnson has insisted that he will oppose any deal containing the backstop, which if triggered would to keep the UK aligned to EU trade and customs rules in order to avoid a hard border with Ireland, if Britain fails to negotiate alternative arrangements by the end of the two-year Brexit transition period.

“What’s the point in us putting down a grand plan just for them to rip it up in front of us? This has to be a mutual process and that’s what the meeting with Juncker will be about,” the UK government source told the paper.

Ahead of their meeting, Juncker dismissed the prospects of re-negotiating a deal with the UK.

Renegotiating the deal “will not be possible,” Juncker told the German newspaper Deutschlandfunk.

“We’ll have to consider which agreements are conceivable for the future that are not connected with the content and substance of the Withdrawal Agreement,” he said.

One Brussels source told Business Insider that recent reports in Britain that Johnson was moving closer to agreeing a revised deal with the EU were “total s— from Westminster sources.”