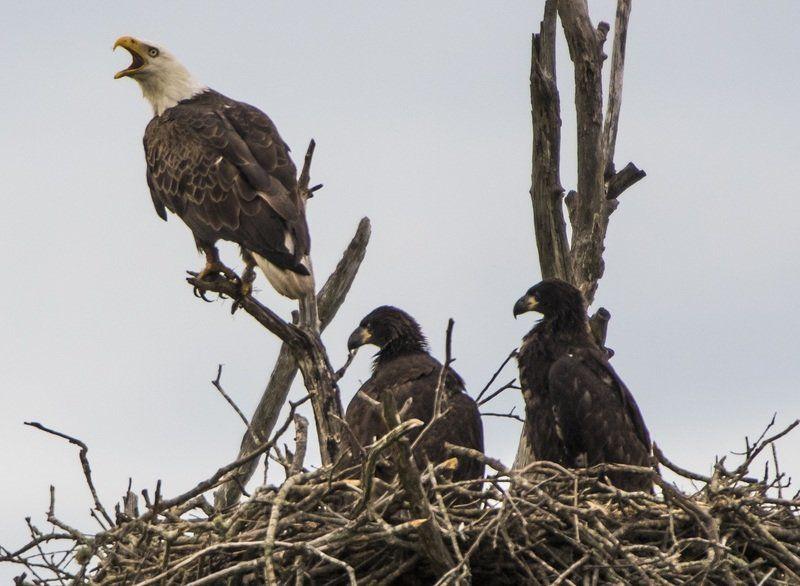 BOSTON – Things are looking brighter for the bald eagle and peregrine falcon in Massachusetts, but a certain well-known bee is poised to officially become endangered.

The Division of Fisheries and Wildlife is updating its list of endangered, threatened and special concern species. The list changes based on knowledge of the status of birds, bees and plants, and the state’s understanding of habitat requirements. The list influences development and land acquisition efforts, since species are afforded legal protections and conservation groups are often guided by habitat protection efforts.

This year’s proposed changes, which are up for a public hearing later this month, would shift the bald eagle and peregrine falcon from threatened species down a notch to special concern species. It’s another step in the right direction for the bald eagle, which in 2011 was downlisted from endangered to threatened.

“The continued recovery of these two birds in Massachusetts is the result of decades of restoration work,” MassWildlife spokeswoman Marion Larson told the News Service.

According to state records, there were 68 nesting bald eagle pairs documented in Massachusetts during 2017. Bald eagles were known to be present at 40 bodies of water, including 23 ponds, lakes and reservoirs, and 17 streams and rivers, with core breeding areas in the Connecticut River and Quabbin Reservoir. The water bodies all have forested shorelines or islands that provide nest and roost trees and adequate supplies of prey.

“This year it’s going to be more than that,” Vitz said. “These are just the nests we have documented. There are certainly additional eagle nests out there that the agency does not know about.”

Bald eagles have acclimated in densely populated areas where disturbances are common, Vitz said, and this was the first year officials documented bald eagles on Cape Cod, where he said there are two or three pairs.

The eagles are thriving in the region and the nation, he said. “They’re doing great. They now have a robust population nationally. We have no evidence that the increase is going to stop anytime soon.”

The proposed list also moves two types of bees that were not even on the list, the American Bumble Bee and Walsh’s Anthopora, up all the way up to endangered status. The previously unlisted Yellow-banded Bumble Bee is also marked for threatened status.

Common throughout Massachusetts more than 50 years ago, the American Bumble Bee during the past 25 years has been in decline, and has become restricted to the Connecticut River Valley region of Franklin and Hampshire counties, according to state records.

“This is something that started decades ago,” said Michael Nelson, an entomologist and invertebrate zooligist at MassWildlife. “It’s getting worse.”

Habitat loss and degradation, commercial pathogens, and the use of pesticides, especially neonicotinoids, are cited as factors driving down the species’ presence.

Nelson said evidence is mounting that pathogens – disease, viruses, and bacteria – are “particulary serious among those three” factors driving down the bumble bee population. Some pathogens, he said, have jumped from the cultivated bee population to wild bees, and “there’s no obvious solution” to the problem.

The bees marked for the endangered list were present statewide 30 to 50 years ago. “Now both of them are extremely rare in the state and have only recently been recorded in a few places over the past few years,” Nelson said, noting their decline throughout the Northeast.

Last month, petitions signed by 20,000 state residents were delivered to legislators asking for neonicotinoids to be restricted. According to the Environment Massachusetts advocacy group, bees pollinate 71 of the 100 most common food crops in the world, including popular Massachusetts crops like apples, cranberries, and blueberries. Bills (H 763, S 463) targeting pesticide use are pending, with Sen. Jamie Eldridge asserting neonicotinoids “are destroying honey bee colonies across the planet and threatening the health of our ecosystems.”

While cautioning that he’s “not saying legislation is ill-advised,” Nelson said legislating pesticide use can be “tricky,” asserting that negative effects are usually associated the the misuse or overuse of pesticides.

The Natural Heritage & Endangered Species Program’s Advisory Committee finalized the proposed species change recommendations in 2018. In all, new listings are proposed for 17 species.

Among other birds, the saltmarsh sparrow and Eastern Meadowlark are moving from not listed to special concern species.

The program also covers dragonflies and three special concern species – the Cobra Clubtail, Umber Shadowdragon and Stygian – are being delisted.

Among plants, the unlisted Squarrose Sedge and Two-flowered Rush are shooting up from unlisted to threatened; the special concern species Crooked-stemmed Aster is being delisted, as well as the endangered Smooth Woodsia; and the American Chaffseed, currently unlisted, is marked for an endangered classification.

The state Fisheries and Wildlife Board plans an Aug. 28 public hearing at MassWildlife’s Westborough field headequarters to take feedback on the proposed changes.