Remember Roller Coaster Tycoon? It’s the game where you not only build your own theme park but also must figure out the right mix of gate price, how much retail and food & beverage to build, as well as how much attraction space you can afford. That’s a very real-world situation for any amusement operator. Over-build and you won’t be able to support the operation with ticket sales, under-build and you’ll have a failure to launch.

It was the job of Disney Legend Harrison “Buzz” Price to answer those critical “Roller Coaster Math” questions for Walt Disney and other famous attraction operators. Buzz set the financial model that informed Disney on not just how much they could build, but even where the park would be located (he selected the spot where both Disneyland and Disney World reside today!). He was a genius who is now recognized with both a window on Main Street USA at Disneyland and a Disney Legend Award.

The brilliance of Buzz Price helped numerous theme parks, museums, destination malls and other entertainment venues get their start. Buzz sadly passed away in 2010. But through the wizardry of David Price, son of Buzz Price, and a team of theme park design experts, the spirit of Buzz has been brought back from the great beyond.

Buzz Price was hired by Walt Disney to analyze data trends, traffic and climate to select the location for Disneyland. He’d later be asked to do the same thing on the east coast for Disney World.  Some modern magic and tenacity have led to an incredible new tool for attraction designers which will allow them to “Ask Buzz” themselves. We’re letting you have a sneak peek before it is publicly announced next week: 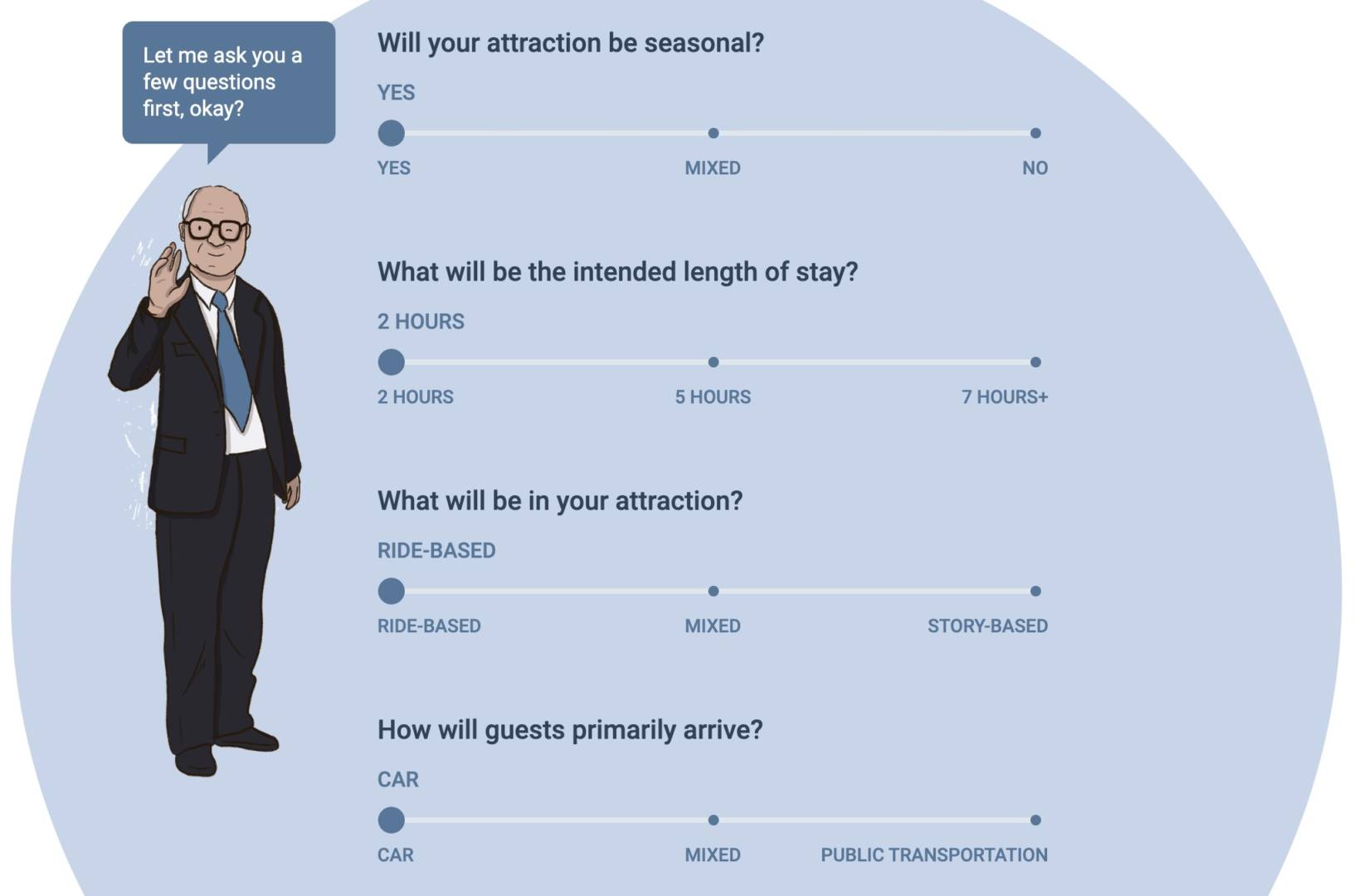 Check it out yourself at Ask.Buzz

The web site is inspired by Harrison “Buzz” Price, of whom the Los Angeles Times wrote, “Nearly every amusement park built since the 1950s in some way reflects Price’s approach to planning theme parks.”

The site is essentially a question and answer session with Buzz Price. First, he asks visitors a few questions about their potential project, such as desired attendance, seasonality, attraction mix, etc. Then, after sharing calculations on peak month, peak week and design day attendance, people can ask questions such as:

The math to finding the answers to all of these questions was originally shared in Buzz
Price’s book Walt’s Revolution! By the Numbers.

There is a reason why Ask.Buzz was developed by those who produce theme park attractions. Creative director Geoff Thatcher said, “Our intent was to build a tool that we’d all want to use during the early stages of a project as the concepts are being envisioned. Our goal was to honor the man who invented the feasibility industry by sharing his knowledge with a new generation of theme park creators.”

For more about the theme park dream team behind the project, you can read more on the Ask.Buzz “Creators” page HERE.

Let’s Hear From You

Harrison “Buzz” Price is one of the unsung heroes of the theme park industry. It was really only after his death that the true impact of his art was shared beyond corporate boardrooms.

Whether you are a would-be theme park designer or just a curious fan, now’s your chance to play with the numbers and see what Buzz would recommend for your fantasy project (visit: ask.buzz). This is just a first step for the project, let us know what future questions you’d like to see Buzz answer on the site.

We’d also like to recommend that you check out an article we ran on MiceChat two years before Buzz received his window on Main Street. We later updated the article when we heard that he would finally be recognized. Lot’s of great information about the legend who helped launch the Disney theme park era:

Finally a Window on Main Street for Buzz Price – Part 1

We also recommend that you check out TheBuzzWay.com, run by David Price. It has some great blog posts about the master himself, theme park design, and links to more theme park resources.