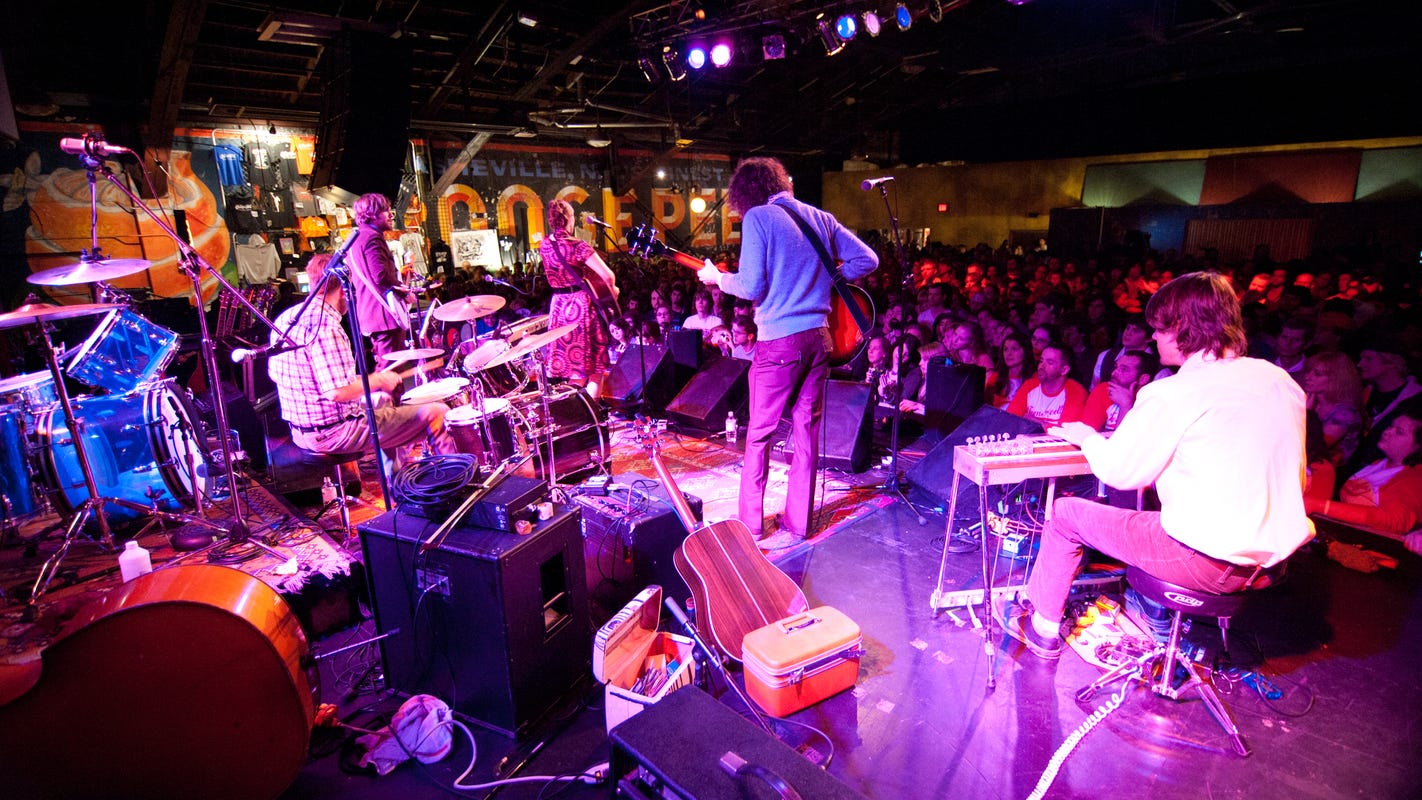 The Orange Peel, a popular downtown Asheville entertainment venue, has had to cancel all shows through the end of June, and might have to extend the cancellations further, depending on future social distancing rules. (Photo: Photo by Sandlin Gaither/Courtesy of the Orange Peel)

ASHEVILLE — For more than three decades every summer, throngs of people have packed themselves into the city’s core for a monthly celebration of live music, cold beer and camaraderie called Downtown After 5.

Nothing could stop it, until COVID-19 came along in Downtown After 5’s 32nd year. For the May and June events, organizers shifted to a livestream format from the Orange Peel concert hall, “adhering to all state guidelines for gathering size,” according to Meghan Rogers, executive director with the Asheville Downtown Association, which organizes the live music series.

“It’s important to us to not only stay engaged with our Downtown After 5 audience, but to also put some local musicians and music professionals back to work doing what they love,” Rogers said in a press release.

Normally held the third Friday of the month during spring and summer, Downtown After 5 had to go to a virtual format in May and June because of the COVID-19 pandemic. This photo shows a 2019 event. (Photo: Colby Rabon)

The shift is a sign of the times in the local live entertainment industry, and those times are tough, involving outright cancellations or postponements more often that virtual replacements. The COVID-19 pandemic has shut down all manner of entertainment venues, and Western North Carolina boasts about 70 venues that offer some form of live music, according to Liz Whalen, marketing and events director at the Orange Peel Social Aid and Pleasure Club.

Anchoring a corner of Biltmore Avenue, the downtown music and event space has been in business for 18 years, garnering national attention as one of the best venues its size in the country.

Entertainment in the Asheville area is integrally connected to tourism — and Buncombe County draws about 11 million visitors a year — but it also benefits locals, who get to enjoy acts, shows and musicians they might not otherwise see. As Tallent says, “Everybody relies on each other.”

At the Orange Peel, surveys have found 65-70% of its audiences come from outside Buncombe County, and 40% from outside North Carolina.

“We know that fans are coming here for live music,” Tallent said. “And when they come here, they go see the show, the live music, but they also go to restaurants and breweries and make a weekend out of it.”

The Orange Peel, which can accommodate 1,050 people for a standing show and 400 for seated events, is a member of the National Independent Venue Association. Whalen said she’s been doing a lot of research on the issue of venue reopenings.

“The consensus is it will probably be 2021 before our industry returns to something resembling what it once was,” she said.

In a normal year, the Orange Peel hosts about 170 touring shows a year and another 30-40 local events. The venue employs about 50 people, mostly part-time, with another 10-15 working extra summer shows outdoors, but they’ve nearly all been furloughed.

Spring and fall are the busiest times for indoor shows, the summer for outside events. The Orange Peel is partnering on a new outdoor venue with Asheville Pizza and Brewing, and it’s on schedule to open in July, though there’s not a huge rush right now.

March, April and May represent about 30% of the Peel’s annual revenue, and that’s largely gone. Tallent is concerned they may be foregoing outdoor events this summer, and that will add to the misery.

The Orange Peel holds about 1,050 people for standing shows, about 400 for sit-down events. It’s had to cancel or postpone all shows through June 30. (Photo: Photo by Sandlin Gaither/Courtesy of the Orange Peel)

“If all we really get to do this year is January, February and the first two weeks of March, we’re going to be down at least 80% for the year,” Whalen said, adding that they may be able to do “some very low-attendance events indoors with streaming component,” but that will be “really more of a good faith gesture than something that keeps the business going.”

Even as North Carolina enters Phase 2 of a three-step plan to reopen the state, Gov. Roy Cooper acknowledged it’s a “more modest step forward” than the original plan proposed. Hair salons, massage therapists and nail salons can reopen, and restaurants can once again welcome dine-in customers.

But bars and nightclubs have to remain closed in this “Safer at Home” Phase 2, which will run through at least June 26. Also, the plan says no more than 10 people should congregate indoors or 25 people outdoors, and that part of the order applies to amphitheaters, arenas and stadiums, conference centers, event venues, as well as parks and beaches.

Rogers, asked if July’s Downtown After 5 event will also have to go virtual, said unofficially she feels “about 95% certain the July event will also be virtual,” given Cooper’s orders. They’re a nonprofit, with volunteers working the event, so the economic loss hurts but doesn’t cost workers’ jobs, but it does hurt breweries and food truck owners.

Live music and other entertainment events and festivals remain in limbo. Even with a move to the next phase, social-distancing rules may still make it tough for live music venues. Whalen said the best they could do at the Orange Peel would be to arrange seats so they could accommodate 90-150 seats, and that makes profitability a problem.

What about the Harrah’s Cherokee Center?

Asheville’s largest entertainment venue, the Harrah’s Cherokee Center Asheville, comprises the 2,400-seat Thomas Wolfe Auditorium, and the Explore Asheville Arena, which holds about 7,000. Between the two, they’ve had to cancel about 140 shows since closing in mid-March, according to General Manager Chris Corl.

Asked how many more he anticipates having to cancel, Corl said, “Hopefully not too many more, but I’m expecting that we may not have indoor events of substantial size until November or later.”

As of May 21, Corl had not calculated the exact loss in revenue for the venue, which is operated by the city of Asheville, “but it’s seven figures,” he said. The auditorium and the arena employ 26 people.

“We haven’t had layoffs or furloughs, but our event staff won’t be able to be paid for the events that didn’t happen, which is a pretty big hit to them,” Corl said, adding that these particular jobs are temporary positions. “We consider these positions a great side gig.”

As far as when the venue, and Asheville, might see a return to something resembling a normal entertainment atmosphere, Corl was succinct.