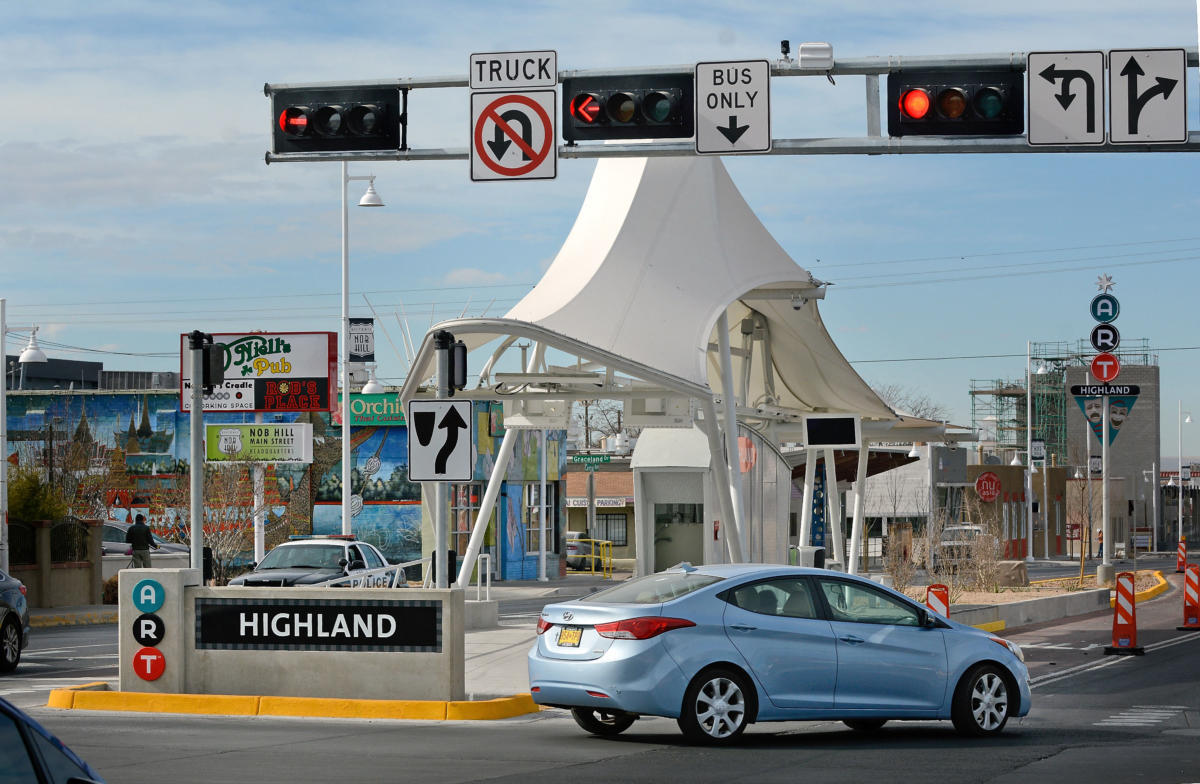 About 50 businesses along the Albuquerque Rapid Transit system corridor received loans under a special fund created to help them weather the project’s construction. (Jim Thompson/Albuquerque Journal)

Two years ago, Albuquerque announced the launch of a special loan program dedicated to helping businesses affected by the Albuquerque Rapid Transit construction, which tore up Central Avenue and altered traffic patterns.

The Central Loan Fund “holds about $700,000 in donations from the McCune Foundation and private contributors, and it is still growing,” heralded a news release distributed April 21, 2017, by a spokeswoman for then-Mayor Richard Berry. The city said some recipients might ultimately have their balances forgiven.

Although ART isn’t scheduled to begin service until next year, the loan program has concluded, according to WESST, the organization that administered it.

WESST ultimately distributed about $490,000 to 47 businesses through the Central Loan Fund, according to Kim Blueher, WESST vice president for lending.

Most other details about the program remain secret.

Berry said in 2017 that the city – which traded some of its financial interest in a development agreement to help fund the loans – would release the names of the businesses that received loans for the sake of transparency. But when the Journal filed a public records request for a list of those businesses, the city said it had no such document, referring questions to WESST.

“The details of the program were all confidential,” she said.

Jaramillo said $50,000 went to fees and administrative costs to run the program. WESST returned $150,000 of unspent money to the city a few months ago at Jaramillo’s request.

But Jaramillo said she could not say why more money did not go into loans.

“That’s a question for WESST,” she said.

Blueher said the $490,000 covered loans to every business referred to WESST through the program, but a separate entity was responsible for accepting the applications and determining who qualified.

But did more apply and get denied?

Vanessa Roanhorse, who led the SBRC, did not respond to Journal messages about application numbers.

Some officials remain skeptical about the loan program’s reach.

City Councilor Ken Sanchez – an accountant whose office is on the ART corridor – said he does not know any businesses that received an ART loan and that he believed the “bureaucratic paperwork involved made it difficult.”

“They did contribute $490,000 in loans to different businesses, but that was not nearly enough for the amount of time it took to construct ART,” he said.

In fact, the city had indicated it planned to have four times that amount of money available.

Drivers negotiate orange barrels during construction of the Albuquerque Rapid Transit project. The city in 2017 announced a new loan fund to benefit businesses affected by ART construction, saying it had about $700,000. The program, now concluded, ultimately lent about $490,000. (Adolphe Pierre-Louis/Albuquerque Journal)

Officials in 2016 announced a goal of raising about $2 million for a new loan fund “to support small local businesses along Central, specifically those in areas affected by development projects such as Albuquerque Rapid Transit.”

Then-Economic Development Director Gary Oppedahl later clarified that the city aimed to raise $1 million for the “guaranteed loans” – loans that would be forgiven for recipient businesses that met certain terms.

But when the program finally launched in 2017 after months of delays – and six months into ART construction – the city announced the $700,000 figure and that it had “partnered with WESST to administer the loans.” The state’s anti-donation clause prohibits the city from using public money to benefit private individuals or entities.

But the city did play a key role in building the fund.

The McCune Charitable Foundation granted $600,000 to WESST under a larger deal in which the city released the Historic Downtown Improvement Co. from some financial obligations under Downtown development agreements for buildings that McCune owns.

Berry administration officials said in 2017 the deal was bigger than any future payments the city expected to receive under those agreements.

But the McCune money was restricted.

It could help businesses only in “metropolitan redevelopment areas” – sections of town the city has identified as distressed. That would exclude most of Nob Hill and the University of New Mexico area.

“We knew there were only a limited number of businesses that fell within the MRA and there was a possibility they wouldn’t use all of the funding for loans, so our agreement was that basically any funding that was left over of that $600,000 would be redirected to some other project,” McCune program officer Henry Rael said.

The city recently asked WESST for the balance, according to Jaramillo, and will spend it on programs such as business navigators and incubators.

But Blueher – who said the loan fund also included money from the Albuquerque Community Foundation – did administer loans to businesses outside the MRAs.

As outlined at the time, qualifying Central Avenue businesses could get up to $15,000 loans at a 3% interest rate. If they met certain terms and were still in business one year after construction ended, their balance would be forgiven.

Blueher said she could not reveal how many recipients had their loans forgiven or how many defaulted. Some of them closed, she said, but she could not provide a number.

She called it an “awesome program” and said WESST was happy to be part of it, having worked with the SBRC to provide consulting and training on top of the loans.

“To this day, WESST continues to work with a handful of those small businesses,” she said.

Bhava Yoga Studio in East Downtown was among the Central Fund’s loan recipients. Co-owner Marisol Brito said the money helped to cover basic operating costs during ART construction and to recover from vandalism that occurred during that stretch. She said the free guidance WESST provided as part of the program was valuable, too.

She said she and business partner Mimi Ludden continue to meet monthly with WESST and expect that the advice will help with client recruiting and retention moving forward.

“The fees for this type of consulting would be something we would not be able to afford as a small business,” she said. “The loan gave us the ability to maintain operations and deal with unexpected costs, but also gave us access to top-notch consulting.”

Brito said she looks forward to a possible bump in business once ART actually gets going, though that will not be very soon.

Due to problems with the buses originally ordered to run the route, the rapid-transit service likely will not begin until 2020 – more than two years later than originally expected.

Although the associated road construction finished a year ago, some businesses along the route say they are still struggling, though their chief concerns now involve crime.

In response, Sanchez and fellow Councilors Isaac Benton, Pat Davis and Klarissa Peña are pushing a proposal to invest up to $1.5 million along the Central corridor in fiscal year 2020, which starts this July 1. It would fund new bicycle police and marketing grants to merchants associations to help bring customers back to the area.