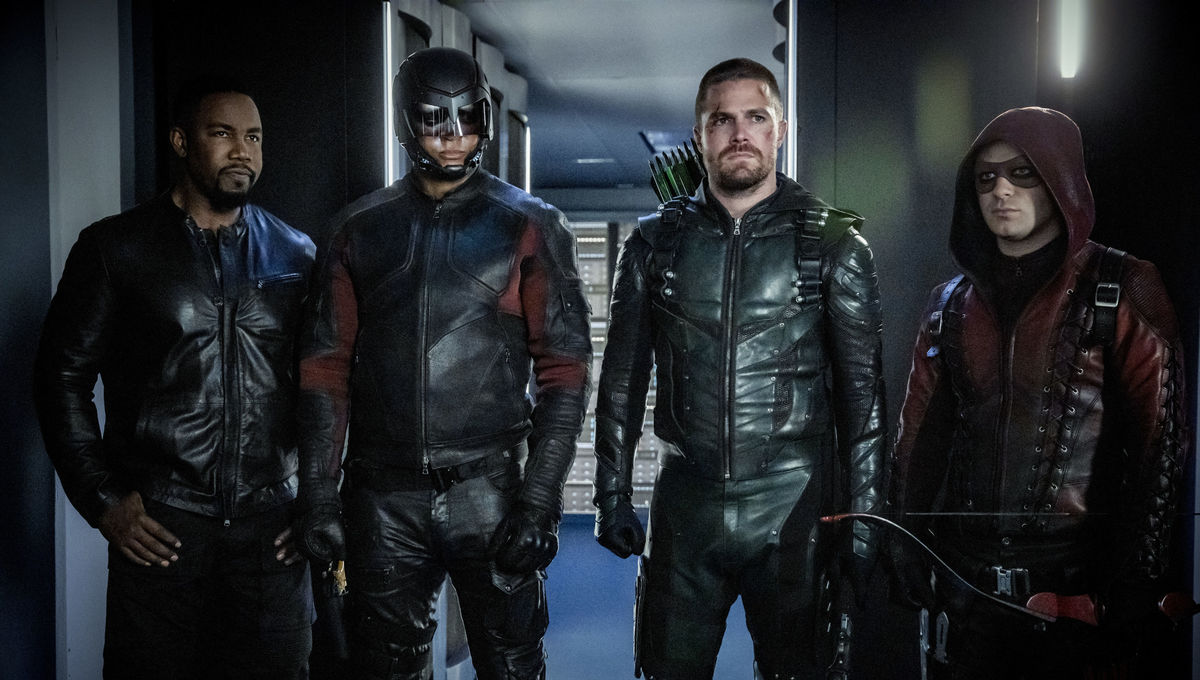 Arrow brings back a guest star while it loses a series regular, the Queen of Mystery and author of Murder on the Orient Express gets a new anthology of horror stories, and Netflix’s upcoming Hilary Swank-led space drama gets its supporting cast… all on this edition of SYFY’s WIRE Buzz!

First up, for its final season, Arrow is apparently saying goodbye to one cast member while welcoming back another. A report from GreenArrowTV.com has revealed that Colton Haynes will sadly no longer be a series regular as Roy Harper, aka Arsenal, for the show’s eighth and final season. But that doesn’t necessarily mean he won’t appear at all. “We hope to have him back,” series executive producer Beth Schwartz told the outlet at the Television Critics Association press tour, before adding: “We love him and he’s obviously one of the foundations of the show.”

Haynes took to Twitter to set the record straight on his departure: “Getting a lot of angry messages so just to clarify… I didn’t exit the last season of Arrow. I was not asked to come back for the final season as a series regular,” he wrote. “But y’all know Roy… he’s never gone for too long.”

So that does bode well for Arsenal fans.

Meanwhile, the Arrow-focused website also revealed that Rila Fukushima will return as Tatsu Yamashiro, aka Katana, for the second episode of Season 8, “Welcome to Hong Kong.” The last time we saw Katana was on the 12th episode of Season 4, “Unchained,” so it’s definitely been a minute. Fukishima first appeared in the Season 3 premiere episode, “The Calm”.

Up next, Agatha Christie, the late Queen of Mystery, is getting her spooooky paranormal horror stories rounded up in a new anthology. Next month, William Morrow Paperbacks will release The Last Séance, a collection of supernatural short stories by the legendary mystery author. The book collects 20 of Christie’s stories centered on the macabre and supernatural, including one that’s never been published in the United States before now.

The stories are a bit less whodunnit (although some do feature Christie’s famous detective characters Hercule Poirot and Miss Marple) and a lot more, WHAT THE HECK WAS THAT??? The stories feature psychic visions, ghosts in the shadows, characters encountering deities, and one centers on a man who switches bodies with a cat. So, Murder on the Orient Express these stories are not.

The Last Séance will be available Sept. 24. It’s available for pre-order now.

And finally, Netflix has announced the supporting cast for its upcoming space drama series Away starring Hilary Swank and Josh Charles.

According to Netflix, Bateman has been cast as Emma’s teenage daughter Alexis Logan. Meanwhile, Essandoh is the British-Ghanaian botanist Kwesi and the mission’s only rookie astronaut, while Ivanir plays veteran Russian cosmonaut Misha and the ship’s engineer, and Panthaki plays Indian astronaut Ram and the crew’s medic, co-pilot and second-in-command. Finally, Wu has been cast as Chinese taikonaut Yu and the crew’s geologist and chemist.

In Away, Swank plays Emma Green, an American astronaut who must leave her husband and teenage daughter behind to command an international space crew on a mission to Mars. The series is loosely inspired by Chris Jones’ Esquire article of the same name documenting astronaut Scott Kelly’s “year in space” mission.

Swank also starred in the sci-fi film for Netflix I Am Mother, which hit the streaming service June 7.

Away, which has been given an initial 10-episode order, does not yet have a release date.