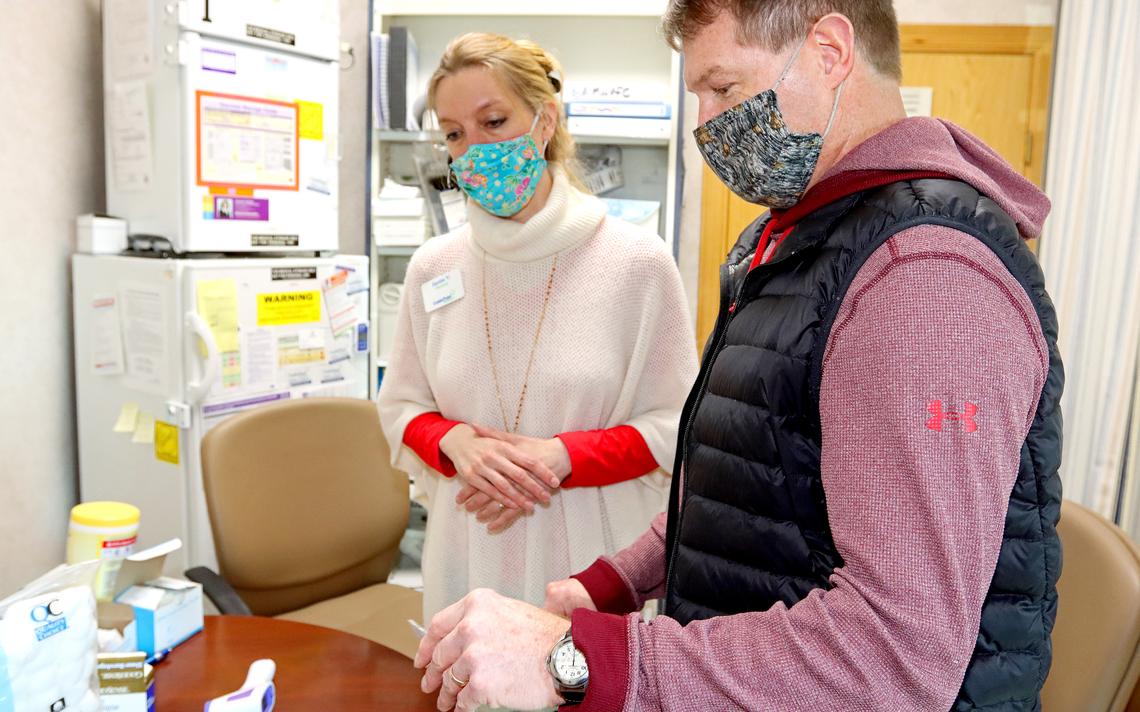 Immersed in grief after losing her husband to complications of dementia last summer, the vaccine represented hope, Kiehlbauch said: a step toward ending the isolation she believed contributed to her husband’s precipitous mental decline.

“People like my mom, at 85, don’t understand why there isn’t more vaccine,” said Kiehlbauch, a former lakes area resident who now lives in Colorado, during a phone interview Wednesday, Feb. 10. “ … They get the shot and it’s a ray of hope. I mean, it was like my mom was shot with cupcakes and unicorns and rainbows. She just had an immediate turnaround and she was excited about the future.

RELATED: Huge gaps in vaccine data make it next to impossible to know who got the shots

“And then she gets this text yesterday and it was like, ‘Oh my gosh, I don’t even know where to go with this conversation.’ … She says things like, ‘I’ll just go be with your dad, I just don’t care anymore.’”

Her mother — whose name was withheld at Kiehlbauch’s request — is among a number of Minnesotans who recently learned they’d have no choice but to wait longer than expected for the second dose of vaccine, thus delaying its full protective effects.

In response to growing frustration expressed by their patients over delays and ever-changing information about the availability and delivery of vaccine doses, leaders of several lakes area health care organizations issued a joint statement Friday offering understanding and reassurance.

Although “potentially worrisome,” the statement noted, delays of second doses weren’t a cause for concern in light of the Centers for Disease Control and Prevention’s updated guidance reporting no loss of vaccine efficacy if patients waited up to six weeks, or 42 days, between doses.

“While we share in the frustration and confusion of the COVID-19 vaccination process, we truly appreciate the patience and understanding of our patients and communities,” according to the statement. “We have been fortunate to provide a first dose of the vaccine to thousands of people and we look forward to continuing that process. As always, our priority is the safety and wellbeing of our patients, staff, and the communities we are privileged to serve.”

RELATED: Gov. Tim Walz to loosen some pandemic restrictions on businesses and gatherings

“Decisions about our vaccination process are based on the information we receive from the Minnesota Department of Health (MDH). As their distribution models change, our plans and processes are adjusted to best accommodate vaccine distribution for our patients and community. Understandably, this has caused frustration for our patients,” the statement read.

“When a facility receives a vaccine allocation, MDH requires that 90 percent of the doses must be used within 72 hours and 100 percent within seven days. This requirement does not allow any facility to hold onto the vaccine to be used specifically for second doses. If doses are not used within that timeframe, they can be taken back by the state and used elsewhere. Essentially, if you don’t use it, you lose it.”

Now, the statement noted, an allotment of vaccine smaller than what’s needed forced them to let some patients know their second dose will not come within the 21-day or 28-day window, depending on whether they’d received the Pfizer or Moderna vaccine.

“Each of our facilities plans to communicate directly with the patients impacted by the delay in receiving their dose. To set expectations throughout the vaccination process, we informed patients during their first dose appointment that we cannot guarantee them a second dose. However, we continue to advocate for doses on their behalf,” it stated. “ … When we receive another allocation of the vaccine, patients needing their second dose will be prioritized in the order they received their first dose. Our teams will speak directly with each patient to schedule their second dose when that time arrives.”

Kiehlbauch’s mother received her first dose at GuidePoint Pharmacy in Brainerd as one of several 65-plus beneficiaries of an empty appointment slot while the business ran a vaccination clinic for educators and child care workers. Mike Schwartzwald, co-owner of the pharmacy, said he thought he would receive 61 vaccine vials this week — almost enough to cover the approximately 400 patients in need of a second dose, with more expected in the upcoming week. Instead, the lakes area vaccine hub location, Essentia Health, was able to offer GuidePoint 16 vials — second doses for about 25% of GuidePoint’s vaccine patients.

“There’s definitely a need that is exceeding the supply at the moment,” Schwartzwald said Wednesday. “There’s definitely some frustration because of that. We’re frustrated, too, because we wish that we had more. Just like the clinics and the state wishes they’d get more from the federal government, too. There’s no one who is happy with this situation.”

“What I’ve asked the Minnesota Department of Health to communicate is that the national supply has been slower coming than what was anticipated, that there was an initial understanding from the federal government that second doses were being held in reserve, that we should utilize the doses we have to get them out as quickly as possible into as many Minnesotans as we can,” Henry said during a video conference interview Thursday. “But as the time came, that information would change to that those second doses weren’t being held in reserve. And as a result of that, we now have a statewide problem with the second doses that are in a little bit of deficit.”

Henry said between 5,000 and 6,000 patients are set to receive their second doses across the Essentia Health system, and the majority of these would not be delayed. This is because Essentia will use what originally would’ve been first doses for other patients to backfill the need after using up designated second doses in late January.

Henry said between 500 and 1,000 patients might be forced to wait longer than expected for a second dose, but they’re working to reduce that number by moving doses around. But he said he does not feel there’s any danger of the second doses being delayed beyond the six-week window of full efficacy. The dose swapping also means it will likely be several weeks before Essentia can resume offering first doses, Henry said.

“I think the key here as to whether or not you need to reschedule individuals is really about having knowledge two to three weeks in advance of what your supply is, and the more steady state that can be in, the less fluctuation and variability in that, then that helps you plan better as well,” Henry said. “I mean, we’re prepared as a health care system to administer much more vaccine than we currently are, as are other health systems in the area and also across the state. We have capacity to deliver many, many more doses than what we have. And it’s the issue of the supply and demand.”

Schwartzwald and Henry, along with spokespeople from Cuyuna Regional Medical Center and Lakewood Health System, all pointed to a Jan. 25 Gov. Tim Walz directive encouraging accelerated vaccine distribution in the state as one moment their approach shifted. On that day, Walz established 72-hour and one-week goals designed to encourage vaccinators to get doses out the door — including a potential consequence for not doing so.

“If a provider does not meet the goals, they should anticipate potential changes to their vaccine allocations,” the news release on the issue stated. “The directive to providers is aimed at more efficient vaccination and will allow for flexibility under certain circumstances that reflect the spirit of the directive.”

“For every first dose allocated to a provider, the federal government holds a corresponding second dose in reserve to be ordered when needed. Second doses are sometimes delivered to providers earlier than the end of the necessary waiting period between doses,” Schultz wrote. “If a provider does not have adequate second doses, it is likely they chose to get more of their patients a first dose with shots that were meant to be second doses for other patients. That would mean there isn’t a corresponding second dose being held in reserve by the federal government. And there simply aren’t extra doses to backfill in this situation.”

Asked by follow-up to respond to concerns that pressure to meet Walz’s goals contributed to the delays, Schultz declined to comment further.

While new reasons to be frustrated with the vaccine process seem to keep popping up, officials remain hopeful wrinkles will be smoothed and supply will catch up to the needs.

This week, Walmart joined Walgreens and Thrifty White pharmacies in directly distributing vaccine to those currently eligible, including at the Baxter location. Appointments there for next week quickly filled on the big box store’s online appointment system.

President Joe Biden on Thursday announced the purchase of 200 million more doses intended to prevent a shortfall later in the year and aimed at having enough to vaccinate 300 million Americans by July. And Johnson & Johnson’s vaccine — a one-dose offering — is set for review later this month by the U.S. Food and Drug Administration in response to the pharmaceutical company’s request for emergency use authorization.

There are also reasons officials gave to be happy with elements of vaccine distribution thus far, starting with the fact it’s available as soon as it is in the first place and is highly effective across all versions in preventing COVID-19, particularly serious disease.

Crow Wing County Public Health Supervisor Michelle Moritz told the county board Tuesday she’s proud of how community partners have worked together to effectively use what doses they have been given thus far. It’s been a collaborative effort, she said, that’s seen a high number of the county’s educators and child care providers, along with one-third of the county’s 65-plus population, receiving vaccine alongside the most vulnerable in congregate care and living settings.

For Kiehlbauch’s mother, others like her and those yet to have the opportunity for the vaccine, though, this optimism does little to address the immediate, overwhelming desire to see more proof of progress toward ending COVID-19’s tight grip on their lives.

“They’ve been doing all the right things, staying in, not seeing friends. They go to the grocery store at the crack of dawn to avoid people and that’s all they do,” Kiehlbauch said. “And then they get the shot and it’s a ray of hope.”