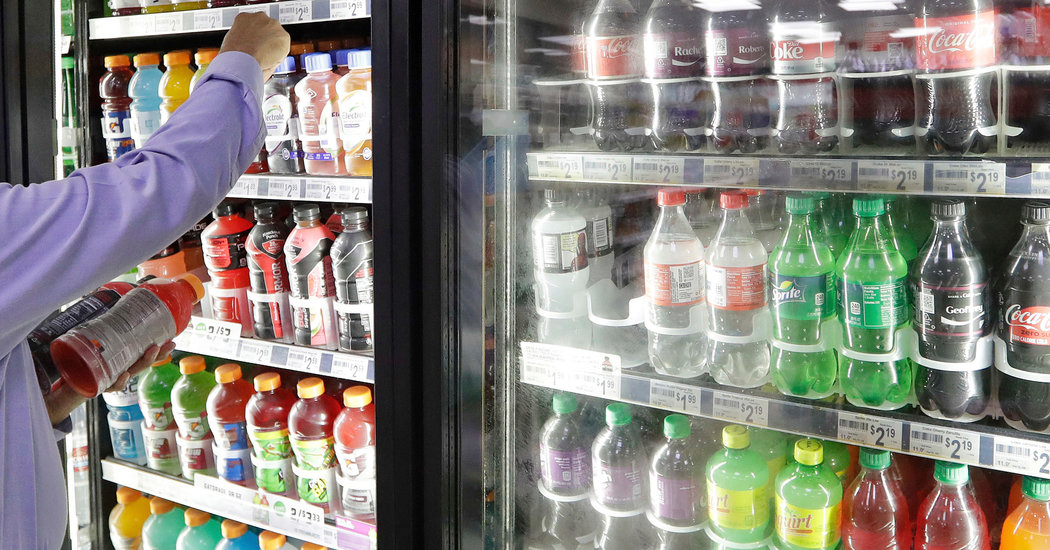 The label on Honest Tea’s organic peach-flavored iced tea has a reassuring message for people who want a beverage that is not too sugary: “Just a Tad Sweet,” the label states.

But a single serving of the beverage, the amount in one 16.9 ounce bottle, has 25 grams of added sugar, equivalent to six teaspoons of table sugar. That is half the daily limit for added sugar intake recommended by the federal government.

Critics say that Honest Tea, which is owned by Coca-Cola, is one of many food companies that mislead consumers about the amount of sugar that is added to their products. Health authorities in recent years have linked consumption of added sugars to heart disease, Type 2 diabetes and obesity and warned Americans to cut their intake. Yet according to some experts, companies routinely market beverages, breakfast cereals, snack bars and other foods as lightly sweetened, heart healthy or nutritious despite containing significant amounts of sugar.

A recent study that examined millions of grocery store purchases in the United States found that dubious claims about sugar, salt and fat were common. Many fruit juices that claimed to be low in sugar, for example, tended to have added sugars and more sugar than comparable juices with no claims on them. Some breakfast cereals labeled low in calories had more calories than the cereals that did not make calorie claims. And sports, energy, tea and coffee drinks with low-sodium claims had almost 17 percent more sodium than similar products with no sodium claims on them.

With sugar increasingly in the public health spotlight, some consumer advocates have urged the Food and Drug Administration to ramp up its enforcement of labeling restrictions on sugary products. They say that the agency needs to define what it means for a product to be low in added sugar — or “healthy” for that matter — to prevent companies from deceiving consumers into buying foods that are higher in sugar than they anticipate.

Clashes over what these terms mean on food labels and whether companies are trying to mislead consumers have led to a flurry of lawsuits.

In October, Kellogg agreed to pay $20 million to settle a class-action lawsuit that accused the company of falsely advertising some of its most popular breakfast cereals as heart healthy and lightly sweetened, such as Raisin Bran and Smart Start. A number of other companies, including Clif Bar, Mondelez, General Mills, Whole Foods, Jamba Juice and Post Foods, have faced similar lawsuits over the level of sugar in their products.

Critics have decried the lawsuits as frivolous. The U.S. Chamber Institute for Legal Reform, a group that represents businesses, described the increase in sugar litigation in a recent report as “a broad attack on products with added sugar” and called the cases against Kellogg and other companies “absurd.”

In January, the Center for Science in the Public Interest, a consumer advocacy group in Washington, sent a letter to the F.D.A. identifying marketing claims on 19 widely sold sugary beverages from five brands that it said were misleading. The group highlighted several flavors of Honest iced tea, which carry the “just a tad sweet” claim, as well as brands like Steaz, which markets several flavors of organic iced tea as “lightly sweetened” despite containing 20 grams of sugar per serving, or roughly five teaspoons.

“If you look at the amounts of sugar in these things that say they are lightly sweetened — I mean, really?” said Marsha Cohen, a law professor and expert on food law at the University of California, Hastings College of the Law. “What’s heavily sweetened to them? It’s a little crazy.”

Sarah Sorscher, the deputy director of regulatory affairs at C.S.P.I., said that such claims give consumers the wrong impression about what it means to have a healthy level of sweetness in their beverages.

“People are drinking these thinking they’re less sweet options,” she said. “But they’re still enormously high in added sugars, and so they’re miseducating consumers about what it means to have a healthy diet.”

At the core of the issue are so-called nutrient content claims. In the early 1990s, the F.D.A. ruled that companies could advertise their products as low in fat, cholesterol, calories and sodium if the amount of those nutrients in their products met certain thresholds. But at the time, health authorities were less concerned about sugar, and the F.D.A. chose not to set a threshold for low-sugar claims because there was no scientific consensus on a healthy level of daily sugar intake. The agency states in its food-labeling guide for industry that the low-sugar claim has not been defined and “may not be used” in marketing.

C.S.P.I. argues that companies flout the rule by using synonyms for low sugar that are known under F.D.A. regulations as “implied” nutrient content claims, such as slightly sweet and lightly sweetened. It said that the agency should take “immediate enforcement action” against companies and define a low-sugar product as one that contains less than three grams of added sugar per serving. That is similar to requirements for other low-nutrient claims, and it is equivalent to roughly 5 percent of the F.D.A’.s daily value, or recommended limit, for added sugar intake.

In a statement, the F.D.A. said that it was reviewing the letter from C.S.P.I. and planned to respond. Steaz did not respond to a request for comment. Honest Tea said that part of the company’s founding mission was to meet consumer demands for beverages that tasted “less sweet than others in the market.”

“We continue to innovate to expand our portfolio to meet our fans’ growing desire for even more unsweetened and less-sweet options,” the company said.

In recent years, health experts have also urged the F.D.A. to update its definition of the term “healthy,” which it last defined in 1993. They say the agency relies on an outdated meaning that lets companies slap “healthy” claims on foods that are low in total fat, cholesterol and sodium but high in sugar. The agency has said it is working on updating its definition to address the fact that public health recommendations on fat, sugar and other nutrients “have evolved” since the early 1990s.

Lawyers, in the meantime, continue to argue that companies are violating state laws against false advertising with false health claims. A recent lawsuit against Honest Tea accused the company of deceptively marketing its beverages as low in sugar. Two lawsuits have accused Whole Foods and Trader Joe’s of disguising added sugar in their instant oatmeal by calling it “organic dehydrated cane juice solids” on their labels. A lawsuit against Jamba Juice alleges that the company portrays its smoothies as containing whole fruits and vegetables while frequently adding sugar, fruit juice concentrates, corn syrup and other additives.

A lawyer in California, Jack Fitzgerald, led a series of lawsuits against General Mills, Kellogg and Post, which together account for 80 percent of cereal sales in America, that accuse the companies of falsely advertising their sugary snacks and cereals as healthy.

The cases have had mixed results. Kellogg has denied any wrongdoing. But as part of its $20 million settlement in October, the company said it would limit or remove “heart health” claims from Raisin Bran and Smart Start cereals and restrict its use of claims like lightly sweetened, wholesome and nutritious on a variety of products. Reached for comment, Kellogg said it did not have anything to add.

In July, a federal judge dismissed Mr. Fitzgerald’s case against General Mills, saying the company properly discloses the amount of sugar in its products and that it is up to consumers to decide whether or not they are healthy. Lawyers for Post meanwhile have asked a judge to dismiss the case against it, saying the company has a First Amendment right to promote the health benefits of its products.

Ms. Sorscher at C.S.P.I. said that by creating new definitions of “healthy” and “low-sugar,” the F.D.A. would make it harder for companies to make claims that confuse consumers. “As long as the F.D.A. is dragging its feet,” she said, “these misleading claims will continue.”