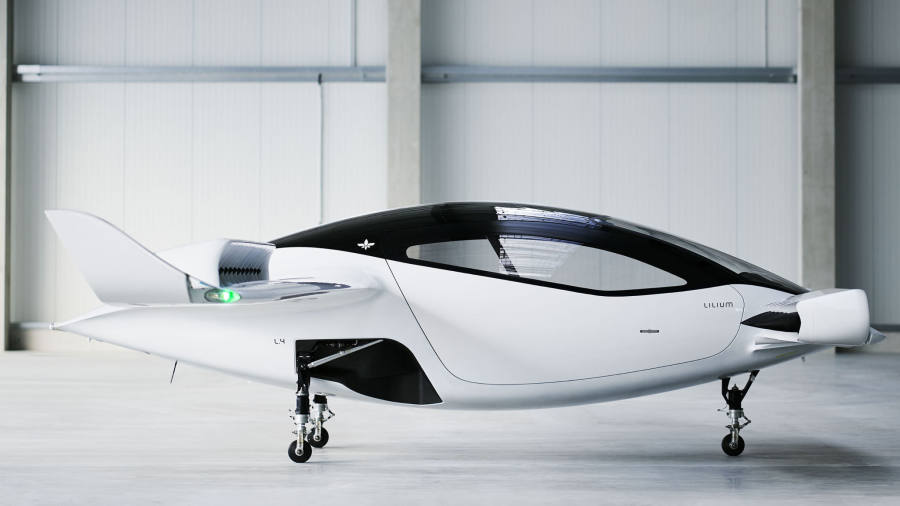 A German start-up will on Thursday unveil what it claims is the world’s first all-electric, five-seater jet that it plans to use as a public air taxi service from as early as 2025 with the aim to revolutionise urban travel.

The jet, developed by Munich-based Lilium and powered by 36 all-electric engines, will be capable of travelling up to 300km in just 60 minutes — cutting down on travelling times across congested cities or regions.

With five seats, including the pilot, it will be able to offer a taxi service for groups or small families, offering a serious alternative to road travel.

Remo Gerber, Lilium’s chief commercial officer, said the cost of the service will be comparable to that of a taxi ride on the road.

For example, to fly from New York’s JFK airport to the centre of Manhattan would cost between $70-$80, but instead of up to an hour in travelling time it would take only six minutes.

The jet, which takes off and lands vertically but then moves into horizontal flight, completed its maiden flight over Germany this month.

Mr Gerber, who said the company was already in talks with a number of cities for use commercially, declined to give a date for an official launch of the aircraft but said “we believe that by 2025 we will be in a number of cities around the world”.

Uber and Kitty Hawk are also looking at launching an electric-powered flying taxi service, while aircraft manufacturers, including Boeing and Airbus, are investing in hybrid-electric propulsion systems.

Rolls-Royce, the UK aero-engine group, last July unveiled plans for an electric aircraft with rotating wings that could take off or land vertically and which it thinks could be available by the early to mid-2020s.

Morgan Stanley said in a note published last year it expected the air taxi market to be worth $1.5tn a year by 2040, with passenger traffic comprising $851bn of that.

A study by consultancy Roland Berger predicted there will be about 3,000 “passenger drones” in use by 2025, rising to an estimated 12,000 by 2030, which will serve as air taxis, airport shuttles and offer intercity flight services.

In the beginning, said Stephan Baur, senior project manager at the consultancy, “those air taxis will be more like helicopters with a pilot”.

Despite the bullish projections, the industry faces several challenges, from gaining public acceptance to building the necessary infrastructure and meeting regulatory demands.

According to Mr Gerber, as Lilium’s jet will be piloted, rather than autonomous or self-driving, it will not require changes to current regulation. He said it was likely that there would be flight “corridors in and out of cities”.

Mr Baur said the industry would need to find ways to ensure these air taxis do not interfere with commercial planes and smaller aircraft.

Richard Aboulafia, analyst at the Teal Group, said he remained to be convinced that such taxi services would be cost competitive with commercial helicopter fleets.

“Just in terms of the economics, how do you make this affordable to the masses?” he said.

Co-founded in 2015 by three friends, including chief executive Daniel Wiegand, Lilium has so far attracted more than $100m in funding from a range of investors.

One of its backers includes Atomico, the venture capital group backed by Niklas Zennstrom, a co-founder of the Skype video-chat and phone app.

According to Mr Gerber what marks out its offering is the jet’s ability to offer a longer range which is due, in part, to the fixed-wing design of the aircraft.

While drone-based aircraft consume much of their energy keeping an aircraft in the air, Lilium argues that its jet can rely on the lift generated by its two fixed wings to do this.