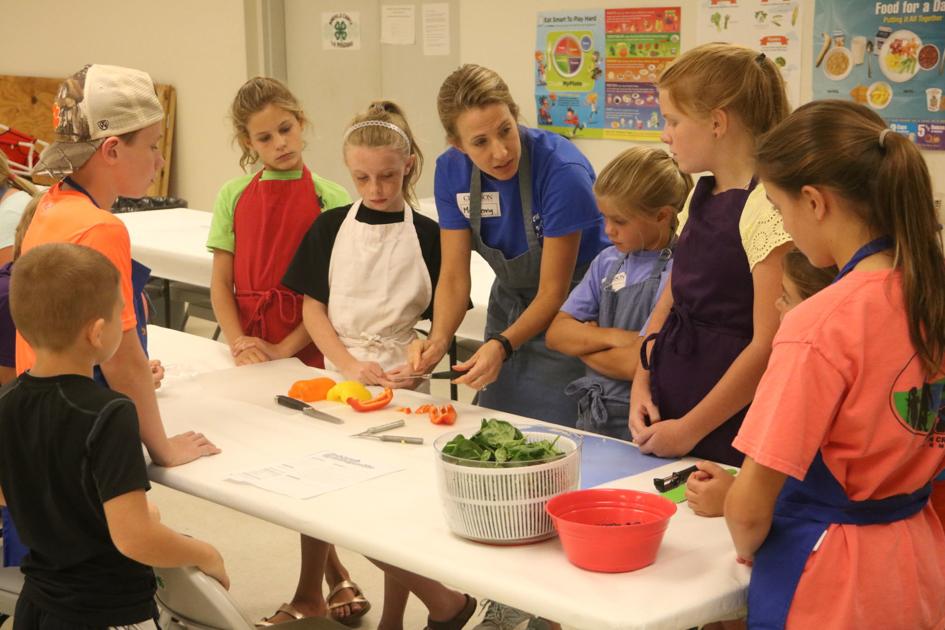 ABBEVILLE — Mikaela Gambrell is opposed to a hypothetical dinner of four bacon strips.

There are no veggies, grains or fruits there — it’s far from a complete meal.

She suggested tweaks to others: a dinner of pasta drizzled with olive oil and a pinch of salt should also have some vegetables and some kind of protein, and a burger with a salad on the side could use fruit.

In a modest, county-owned building on Industrial Park Road, Abbeville’s 4-H program is tackling the chronic diseases that ail Abbevillians, one cooking lesson at a time. Kids are taught how to read food labels and make informed choices at the supermarket.

The program has not strayed from 4-H’s roots as an organization spreading agricultural knowledge to young people who, with each succeeding generation, are increasingly more likely to lack it. But it has also diversified, and in Abbeville, more than one-third of this summer’s camps are food-themed.

“Our statistics here in Abbeville are pretty grim according to our hospital that did a needs assessment,” said Jenny Mountford, Abbeville’s 4-H officer.

The Affordable Care Act requires hospitals to conduct a community needs assessment every three years to determine what a community’s needs are and how they can be met.

Amanda Morgan, who conducted the assessment for Abbeville Area Medical Center, said areas of concern were obesity, access to healthy food and diabetes, from which about a third of the people who come to the hospital suffer from.

Most chronic illnesses like diabetes “could be completely eliminated with a healthy lifestyle,” said Kaylor Arant, of Clemson’s SNAP-ed program, who volunteers with 4-H.

“We do find that a lot of kids don’t know what a balanced plate looks like,” Mountford said. The balanced plate has replaced the food pyramid as the system by which the government recommends food groups — and which to seek or avoid — are taught.

Mountford also uses a stoplight system to teach the kids in her program that nutrition isn’t as simple as eating or avoiding something. Some foods are bad — in excess.

Foods they can eat with abandon are green, or “go.” Those they have to think twice about are yellow, or “slow.” And those they shouldn’t eat at all are red, or “no.”

Wednesday afternoon, the kids made black bean quesadillas after Mountford ran them through the rules of the kitchen, like keeping sanitary and using knives safely.

Studies have found that nutrition and poverty are linked. And in Abbeville, where each school falls under Title I designation, a high percentage of its students come from low-income families.

Although people experiencing poverty are limited in what they can afford and often lack the transport they need to get to a market with fresh produce, Mountford wants to teach children who might come from such families how to make good decisions “so that when they’re old enough to make a decision for themselves, they’re at least educated,” Mountford said.

The community, Morgan hopes, will eventually reap the benefits of these lessons.

“When you address the needs of any community, as the healthcare system, we can’t tackle all of them,” Morgan said. As such, the 4-H program is a critical partner.

“You have to start these healthy habits young,” she said. “When you have a 40-year-old person and you tell them to stop eating things, it’s a lot harder than when you have a person who’s 7 or 8.”

4-H’s roots in agriculture help impart the message Morgan was children to absorb, she said.

“In order for the children to understand healthy eating and healthy living habits, the first step is to understand where your food comes from,” Morgan said. “They’re curious by nature, they want to know the why, so you have to show them, ‘I’m not telling you to do this because I’m an adult, I want to show you this because it’s kind of cool and I want to give you that power and that knowledge.’”