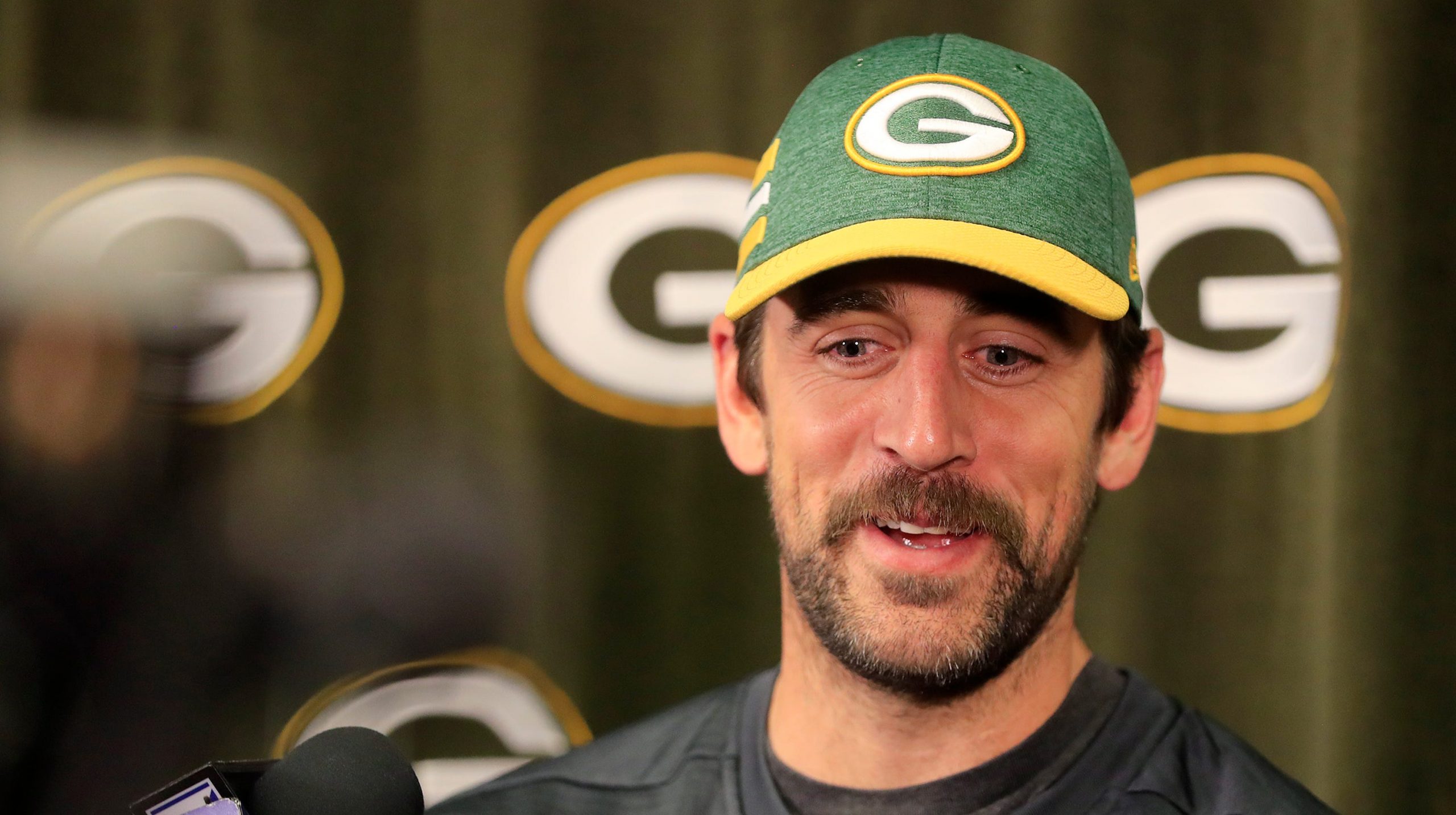 Jim Owczarski and Olivia Reiner discuss RB/KR/PR Tyler Ervin’s 2019 performance in just a few games and analyze his potential in 2020.

We’ll start with  Aaron Rodgers talking about the Packers’ lack of big-name free-agent signings on the radio with Pat McAfee and A.J. Hawk last Friday.

Rodgers said Green Bay’s free-agent inactivity was to be expected after the splurge a year ago that netted Za’Darius Smith, Preston Smith and Adrian Amos and helped lead to a 13-3 regular-season record and an NFC North title.

Aaron Rodgers is bullish on the Packers’ outlook for next season. (Photo: Adam Wesley/USA TODAY NETWORK-Wisconsin)

Rodgers lauded the re-signing of return man Tyler Ervin and tight end Marcedes Lewis while noting that right tackle Bryan Bulaga (who signed with the Chargers) would be missed.

“So I think the (championship) window’s open, that’s the exciting part,” Rodgers said. “I’m not going into the last five, six years of my career going, ‘Man, it’s going to be another one or two years before we’re back in the mix.’ No, we’re in the mix right now and we have a chance to be one of those teams like this (past) year where we’re in the final four and with a chance to win it all.”

The Devin Funchess deal is done:

The #Packers‘ signing of WR Devin Funchess leaves them roughly $11 million under the salary cap. https://t.co/3srJ0YNI9X

The Packers hired a sports psychologist:

#Packers named Dr. Chris Carr the Director of Performance Psychology and Team Behavioral Health Clinician, per team. Carr has been a team consultant since 2018.

Rodgers definitely approves of the hire:

Aaron Rodgers on Dr. Carr this past December. He’s a big fan. #Packerspic.twitter.com/LEAi8ZQtF8

Love story: Talented QB could fall in first round:

Most mock drafts have Love gone long before the #Packers are on the clock. Then again, Aaron Rodgers was supposed to be long gone, too. https://t.co/fvgByEEy8T

It still remains to be seen how the Packers will conduct their draft:

The offseason routines are being totally disrupted:

Offseason workouts were supposed to begin next week. Instead, the NFL and NFLPA are working to make sure the players’ physical and mental health doesn’t suffer during a spring that’s lacking its usual structure: https://t.co/AviHes2FsR

A look at what kind of compensatory picks the Packers could receive next year:

With the bulk of free agency behind us, what could the #Packers expect for compensatory picks next year? @nickkorte might know more about this than anyone on earth.https://t.co/BpOywVO8cY

It’s a year too early for the Packers to take a quarterback with a high draft pick, writes Zach Kruse of PackersWire:

5 reasons why the Packers shouldn’t take a QB high in 2020 draft https://t.co/bAFpKoQX6Q

Damarious Randall is on the move again:

Former Browns & Packers S Damarious Randall is headed to the Las Vegas Raiders on a 1-year deal, per @JosinaAndersonpic.twitter.com/GIcAeJN2oN

.@Big__Blake50 gives us a tour of the weight room he built with his dad 👀🏋️‍♂️ pic.twitter.com/NeGTCGEQ5s

Kyler Fackrell is excited about being reunited with Giants defensive coordinator Patrick Graham:

Kyler Fackrell ready to bring his versatility to Giants #nyg#giants#NFLhttps://t.co/BY0C1yXIHR

This isn’t Packers-related, but still a must-read:

#Jaguars legend Tony Boselli talks publicly for first time to T-U about he and wife Angie testing positive for coronavirus, the anxiety he felt being in ICU at Mayo Clinic with doctors trying to restore his oxygen levels. Here’s the story: https://t.co/lIPihVY99k

And finally: A chance to play golf with Mason Crosby for a great cause:

Please join me in supporting @MakeAWishWI tonight for their annual #WishNight gala. Please check out their auction items here. https://t.co/X4IAo7HU3dpic.twitter.com/uR5p3H57Ot

NOTE: The Packers Morning Buzz will be off next week and return April 14.