A rare moment of unity in a bleak political winter 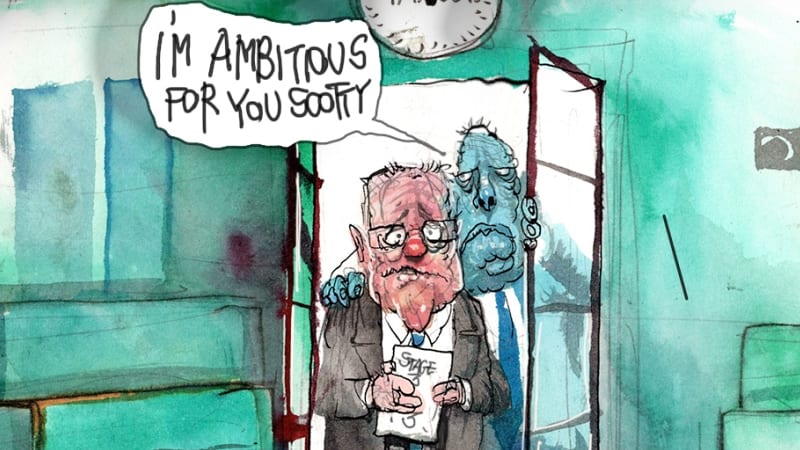 A rare moment of unity in a bleak political winter

But the workings and alliances of the parliament will be unlikely to be as straightforward on the other complex issues it faces. Religious freedom, in particular, comes to mind.

The government has set down some markers on its priorities in the first round of introduced legislation which give some inkling of the extent to which it will be focused on the needs of voters, as it has said it will be focused, rather than its interest in conducting the odd ideological war.

There were nine other pieces of legislation introduced to Parliament this week, beyond the tax cut bill (formerly titled the Treasury Laws Amendment (Tax Relief So Working Australians Keep More Of Their Money) Bill.

There was legislation to stop animal rights protester invading farms, and a bill to repeal the so-called Medevac legislation passed last year.

Quite a lot of the legislation comes from Peter Dutton’s home affairs portfolio.

One bill seeks to extend for a further twelve months ASIO’s powers – gained after September 11 – to detain people for questioning for up to seven days, despite both Liberal and Labor members of parliament’s security and intelligence committee recommending last year that the powers should be repealed.

There is also the so-called temporary exclusion order legislation, which got some publicity this week as it was unveiled at the same time as new counter-terror raids were conducted across Sydney. This legislation allows the government to exclude people from returning to Australia for up to two years.

Once again, the parliamentary committee recommended changes to these proposals when they were first put up but it’s not clear the recommendations have been fully heeded in the new bill.

And then there is industrial relations reform, which really goes to the powers of government to go after both unions and union officials like, for example, John Setka.

But perhaps the most difficult issue for both sides of politics was the one addressed by both Scott Morrison and Anthony Albanese before anyone had formally taken their seats in Parliament House this week.

We seem to be adding more and more layers of ceremony to the beginning of a parliament as each new one begins. There is now the ‘traditional’ visit to the Last Post Ceremony at the War Memorial, and the ‘traditional’ prayer service before the focus moves to Parliament House itself.

One important part of those Parliament House ceremonies now is the indigenous welcome to country and smoking ceremony.

What made it particularly significant this year is that both our political leaders appear to have invested political capital in doing something about indigenous recognition during this term of parliament.

They are, of course, not the first to do so. But it feels like the pressure is building for something to finally happen. The presence of indigenous people in the senior ranks of both sides of the parliament changes the dynamics. The prime minister and opposition leader are probably the best matched twosome in terms of pragmatic politics we have seen for some time.

The meeting of the two men to meet on the first day of sitting to discuss possible areas of common ground on thorny issues from indigenous recognition to press freedom was important.

Their speeches at the welcome to country showed warmth and they showed work.

“I think Anthony and I are both very optimistic about the partnership that can be forged”, Scott Morrison said.

Noting the indigenous MPs from both sides who were present this week, he compared it with the official opening of what we now call the Old Parliament House back in 1927.

“Not a single First Australian was invited to celebrate”, he said.

They left their home at Brungle Mission near Gundagai and began a long walk to Canberra.

“They trudged over the mountains until they arrived in the nation’s capital.

“The 80-year-old King Billy stood firm in front of the new Parliament and protested ‘his sovereign rights to the Federal Territory’.

“The police ordered him to move on – fearing his shabby clothes and the dogs at his bare feet would offend the sensibilities of the Duke and Duchess of York who were in attendance.

“They called on him to stand his ground. He did.

“A clergyman declared that he ‘had a better right than any man present’ to be there, and that was true.

“King Billy won that fight. And the next day, he was among those citizens officially presented to the Duke and Duchess.His long walk to Canberra paid off.”

“We would all be stronger for it and once done, we would wonder, just like with the apology, just like this welcome to country, why we hadn’t done it before?

“I say to the Prime Minister, I look forward to working with you in the spirit in which we’ve already had discussions. We will work with you, this can be done. We have been welcomed to this country today in such a generous spirit with such a hopeful heart and we should respond with courage, kindness and with determination.

“Forty times we have opened the parliament in this country without a voice to parliament for the first nations of this great land. This 46th parliament should be the last time in which we do that.”

In the bleak winter of political cynicism, we can only applaud a rare moment of bipartisan ambition and optimism.