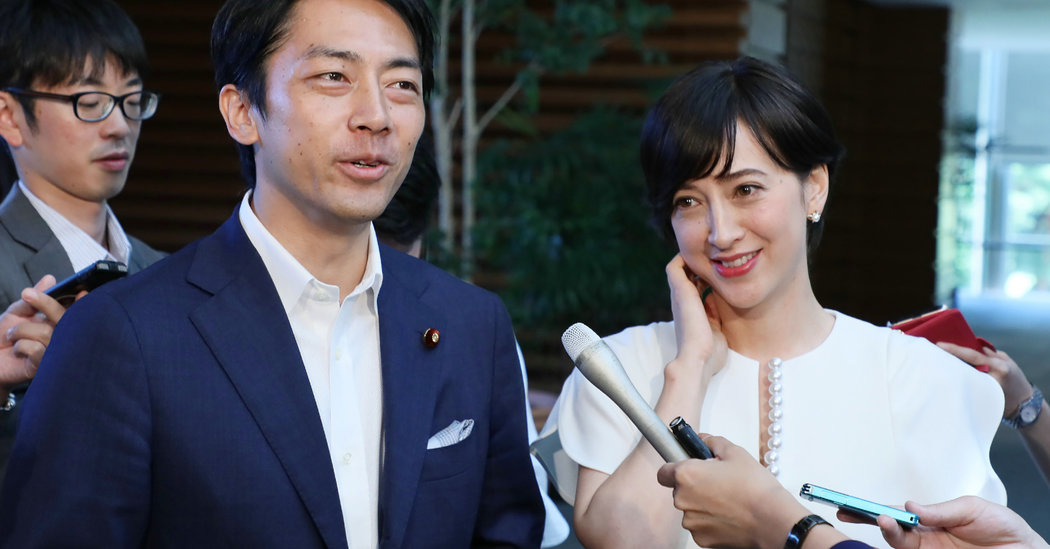 TOKYO — In a move heavy with symbolism for Japan’s workaholic fathers, Shinjiro Koizumi, a politician seen as a possible future prime minister, said on Wednesday that he would step back from his duties to care for his newborn child after the birth later this month.

By the standards of other wealthy countries, Mr. Koizumi, Japan’s environment minister, will not be away from work for long. He will take a total of two weeks of paternity leave spread over three months, during which he will work flexibly from home or put in fewer hours.

But in Japan, where fathers who take time off after a birth are rare, word of Mr. Koizumi’s intentions swept social media and drew praise from supporters as setting a powerful example.

“I hope my taking paternity leave will lead the way of working styles to one where everyone can easily take child-care leave without hesitation in the environment ministry,” Mr. Koizumi, 38, said in a meeting with his staff on Wednesday.

In Japan, men are generally expected to demonstrate total loyalty to their employers, often at their families’ expense. The announcement from Mr. Koizumi, whose father, Junichiro Koizumi, was one of Japan’s most popular modern prime ministers, raised hopes that those expectations could begin to change.

“It’s a good precedent, and it’s about time that this kind of thing becomes more normal,” said Koichi Nakano, a political scientist at Sophia University in Tokyo.

Mr. Nakano acknowledged that even with Mr. Koizumi’s leadership, other men might still face obstacles to taking time off for child care.

“Someone as privileged as Koizumi still struggled to get this paternity leave,” Mr. Nakano said, referring to a conservative backlash that arose as Mr. Koizumi publicly pondered the move. “So how hard must it be for other people in other lines of professions? But it has to start somewhere.”

On paper, Japan has exceptionally generous paternity leave laws. According to a ranking by the Organization for Economic Cooperation and Development, Japan and South Korea grant fathers more time off for child care than any of the world’s other wealthy countries, including the Scandinavian nations. Japanese fathers are entitled to take up to a year off after the birth of a child — the same right granted to mothers.

Yet very few men take advantage of these policies. According to government statistics, just over 6 percent of eligible men working for private companies took parental leave in 2018, compared with more than 82 percent of mothers.

Men who work in the government are more likely to do so: Among public employees, about 21 percent of eligible men took parental leave last year, compared with nearly all mothers in government employment.

The role of fathers in Japanese families has been the focus of growing attention as the number of babies born in the country has fallen to the lowest level since the 19th century, with some analysts attributing the low birthrate in part to the burdens on working mothers. Over all, women in Japan still take on the vast majority of the responsibility for child care.

Yumiko Murakami, head of the Tokyo Center of the Organization for Economic Cooperation and Development, suggested that if more fathers followed Mr. Koizumi’s example, mothers might get some relief from the burdens of parenting and be willing to have more children.

“If fathers take leave and help their wives with babies, maybe wives will have more support at home and they might decide to go for No. 2 or No. 3,” Ms. Murakami said. “So let’s hope this is a good sign that things are starting to change in Japan, slowly but surely.”

In the private sector, those few fathers who do exercise their right to paternity leave take, on average, less than five days. Mr. Koizumi’s leave, at two weeks, will not amount to much more.

Some fathers who tried to take paternity leave have accused their employers of discrimination. Last year, two men who took time off after the birth of their children sued their employers, saying the companies demoted them or cut their pay to punish them after they returned.

One of them, Glen Wood, an American who sued his former employer, the investment bank Mitsubishi UFJ Morgan Stanley Securities, applauded Mr. Koizumi, particularly given his lineage as a fourth-generation conservative politician. Mr. Koizumi’s father did not take paternity leave when his children were born.

“I think it really points in the right direction for the country and for corporations,” said Mr. Wood, who alleges that he was demoted and eventually fired because he took paternity leave.

Mr. Wood cautioned that the country “loves window dressing and they love symbolism.” But, he added, “knowing Japan and knowing its very long history and knowing how slowly things change, I still think that the movement that we started here regarding the focus on paternity leave really has legs.”

Mr. Koizumi set off a media frenzy last summer when he announced that he had wed his pregnant girlfriend, Christel Takigawa, 42, a celebrity television presenter, and said he was considering taking paternity leave.

After criticism from some conservative lawmakers, Mr. Koizumi watered down his plans, saying that his work might prevent him from taking leave. And after his announcement on Wednesday, some critics questioned his commitment to his job.

“Koizumi’s an environment minister, right? A novice taking paternity leave,” wrote a commenter on Twitter. “Well, whatever, but does he really love his work?”

Female lawmakers, who make up less than 14 percent of Japan’s Parliament, have struggled to combine politics with child rearing.

After Megumi Kaneko, a lawmaker in the lower house, gave birth to a son in 2016, she took a brief maternity leave, then was criticized for using a government car to drop her son off at day care. (Her husband, also a lawmaker, said he planned to take paternity leave, but he resigned days after their son was born, after news leaked that he had had an extramarital affair.)

When Takako Suzuki, another member of the lower house, announced her pregnancy in 2017, critics said she was not acting like a responsible lawmaker.

But the example of a male cabinet minister might carry more weight in patriarchal Japan, supporters said.

“We need an achievement like this, ‘a male minister taking paternity leave,’” wrote one commenter on Twitter who described herself as the mother of three children. “It means a lot just to be able to destroy an excuse like ‘it’s not easy for men to take leave (because they tend to be in more important positions than women.)’”

On his blog, Mr. Koizumi discussed his initial hesitation to take leave because of his duties as environment minister. And he acknowledged that it would take more than one celebrity politician to change an entrenched culture.

“There are men who are going through similar difficulties. They want to take the leave, but it’s hard,” he wrote.

“Child-care leave will not be prevalent,” he added, “unless we change not only the system, but the atmosphere as well.”