A bee-keeping rabbi explains what the buzz is all about 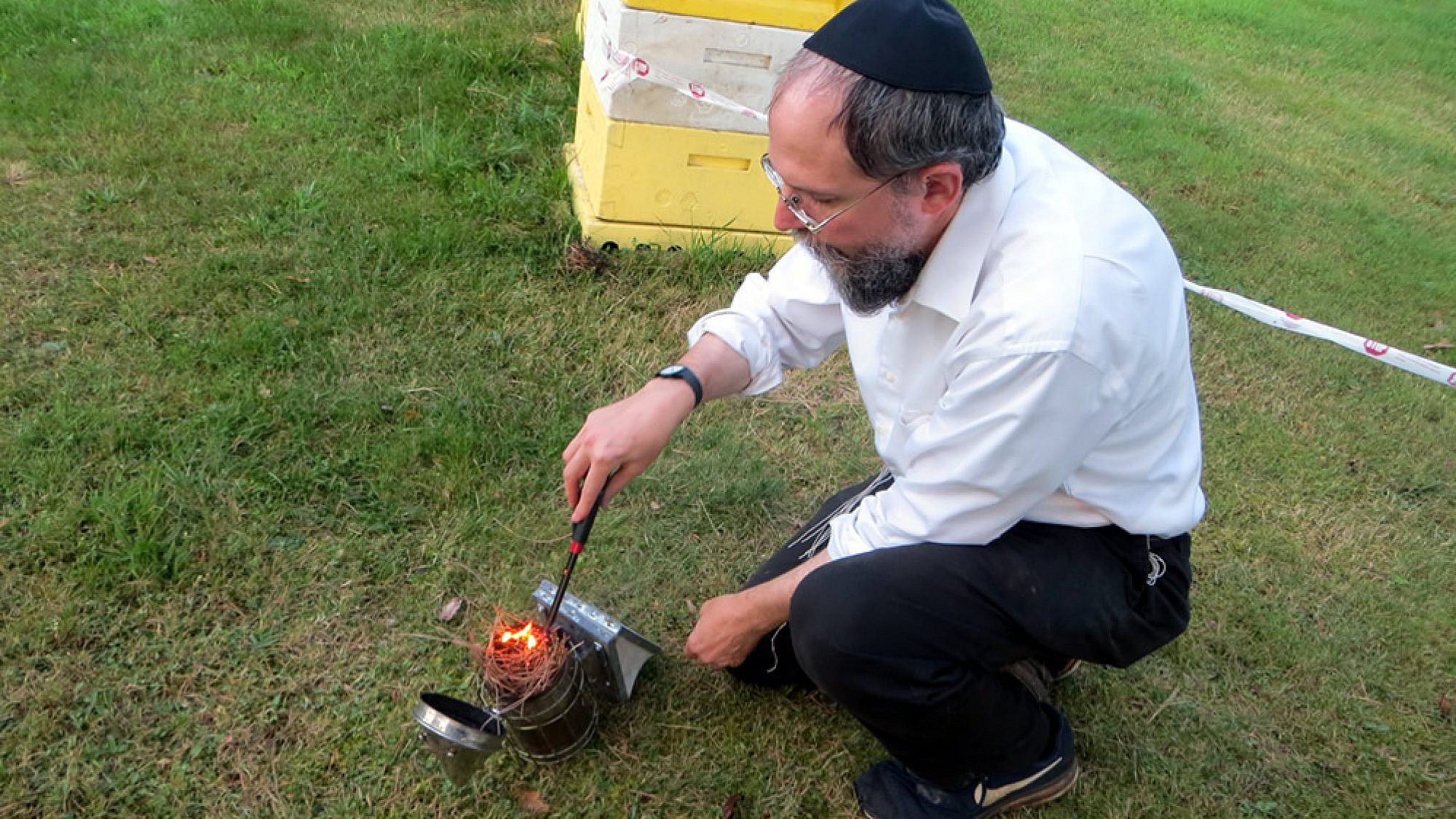 A bee-keeping rabbi explains what the buzz is all about

(September 27, 2019 / JNS) Human instinct may be to swat, run away or do a frantic little dance to avoid contact with bees, but like most small living creatures, they have more to fear from us than we them. In fact, they have much to lose; it’s true that when a worker bee—the ones people see flying outside hives and near flowers foraging for nectar and pollen—stings, it seals its fate and dies. It’s also true that there has been a marked decline in the honey-bee population in the United States and on a global level.

According to data from the Bee Informed Partnership, a nonprofit associated with the University of Maryland, from April 1, 2018 to April 1, 2019, the managed bee population decreased by 40.7 percent. The overall loss rate is around the average of what researchers and beekeepers have seen since 2006.

This, of course, is nothing new to Rabbi Avraham Laber, who with his wife, Nechama Dina, co-directs Chabad-Lubavitch of Southern Rensselaer County and Jewish Girls Unite in New York, about 20 minutes east of Albany. In fact, when asked about the decline of bees, the rabbi doesn’t hesitate in naming the main cause: pesticides and the negative effects of chemical-intensive agriculture (parasites, pathogens and climate change have also been named as contributing factors).

The rabbi knows this because he keeps bees—and has since 2004. The Labers recently moved to a two-acre bucolic piece of property, where three large boxed hives sit on a patch of lawn. In August, they acquired 12 more acres, complete with a pond, from the sale of land by their neighbor; the expanded Jewish Leadership Campus is being used for summer and winter programs for girls, Jewish holiday retreats and outdoor Torah-nature classes. The rabbi also teaches schoolchildren about the significance of bees and their relationship to Judaism. 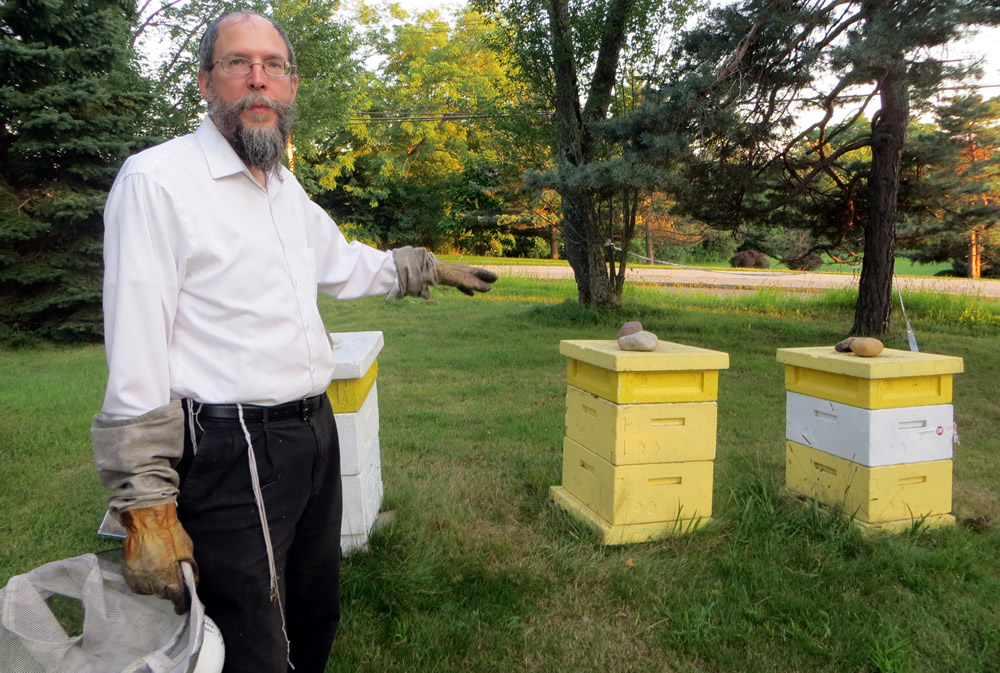 Laber explains that when the bees bring back nectar, it’s deposited into cells in the hives. Photo by Carin M. Smilk.

Honeybees are stellar flyers, moving at speeds of about 25 kilometers per hour and beating their wings about 200 times per second. The rabbi refers to the corner of the plot as a “landing strip for bees,” with their ability to fly nearly two miles from the hives. They have been described as more efficient than planes because they can fly on a drop of honey and carry loads equal to their weight.

Laber encourages other rabbis to become backyard beekeepers. He says it’s an educational way to connect children and adults to wildlife and the outdoors, as well as a gateway to teach how aspects of nature are expressed in the Torah and Jewish life.

As the High Holidays approach, along with the season best-known for honey consumption, he shares some of his knowledge about the complex colonies of bees.

Q: Can you explain the structure of the hives themselves?

A: The modern beehive is a box made out of wood or hard Styrofoam. It has 10 frames upon which the honey bees will build wax cells, called honeycomb. The design was developed by Lorenzo Lorraine Langstroth in the 1850s. There are many advantages to this design, but the greatest is that it permits the beekeeper to easily remove each frame for inspection and harvesting. 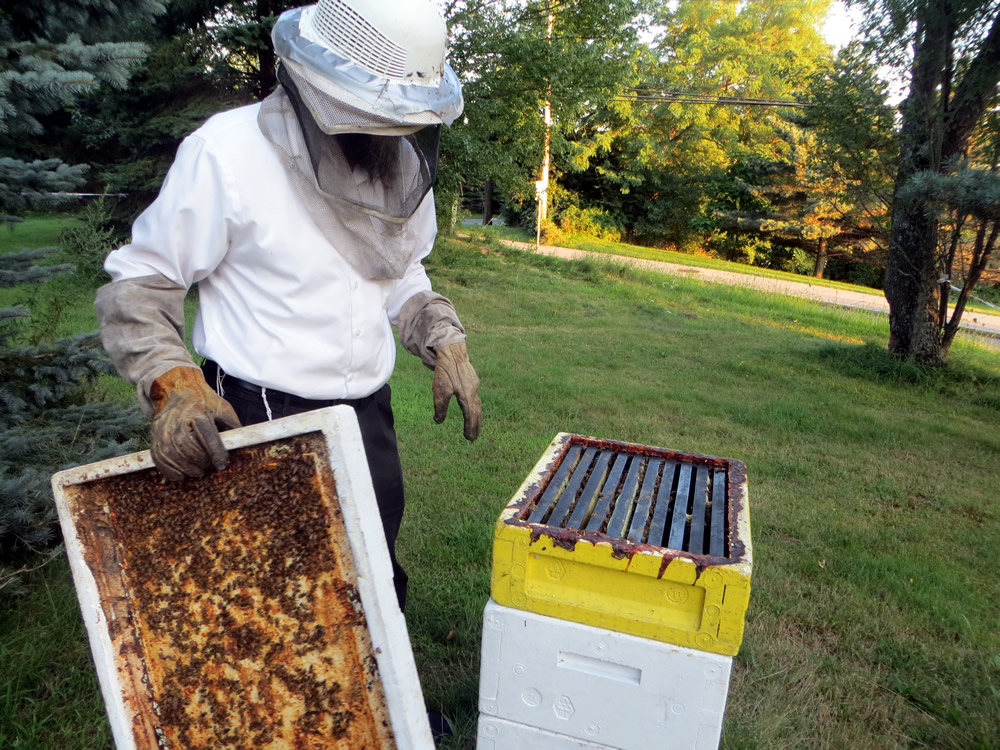 The rabbi takes off one of the frames to show the inside of the hive. Photo by Carin M. Smilk.

Q: What are those flying bees looking for?

A: The foraging honey bees fly out and bring back the three vital necessities for survival: nectar, pollen and water. The pollen is packed into small “briefcases” under their wings to feed the larvae: the developing bees.

Q: What is the life span of a flying bee?

A: The life span of worker bees, which are female, is best measured in miles. Their lifetime is about 500 miles of flying. After that, their wings get worn out, and they will soon die.

Q: Why is the queen bee so important?

A: Every beehive has only one queen. The queen mates in a brief session, and that’s usually enough to supply her for life. The queen is the only bee that lays eggs. (She takes her job very seriously, laying between up to 1,000 eggs for most of the year.) The queen has a longer body devoid of stripes that the others have. The only time a queen leaves the hive is when she mates early in her life, and if the colony decides to swarm. Worker bees constantly care for the queen, by offering her food and cleaning her.

Until the 1600s, most people assumed that there must be a king at the center of the beehive. Now, everyone knows that the queen is the center, and most of the bees are females. In the Torah, the Hebrew word for a bee is devorah, a female gender word. Fall is a sad season for male bees because as nectar stops flowing, almost all the unproductive males are thrown out of the hive, and they will soon perish. 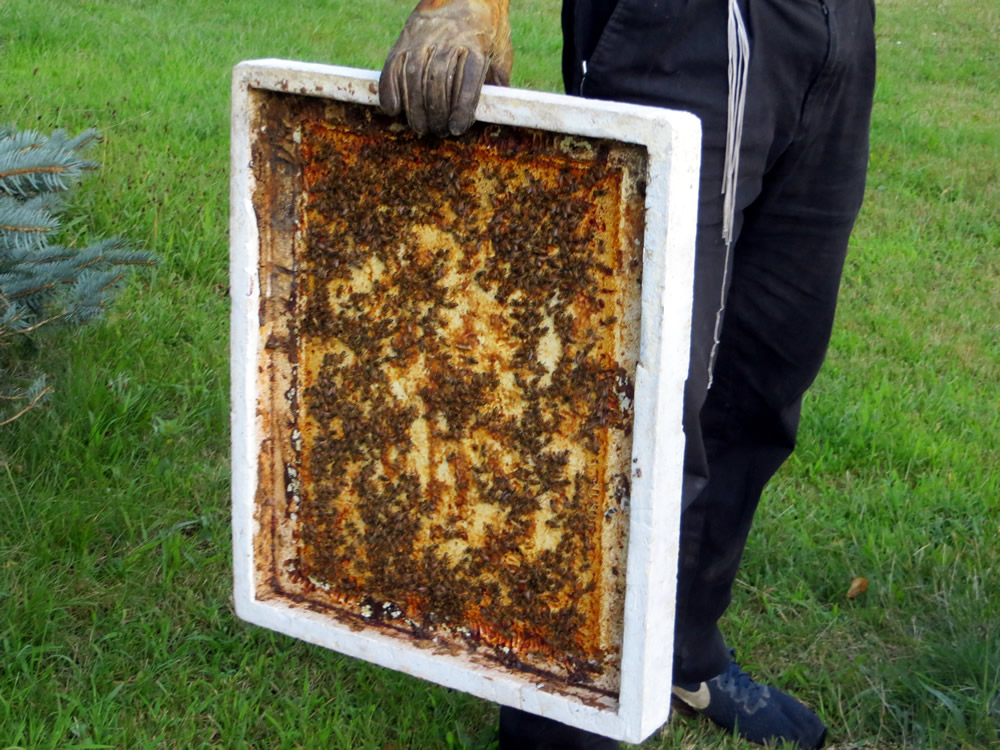 Bees by the thousands are unperturbed and busy at work. Photo by Carin M. Smilk.

Q: Can the queen bee sting?

A: The queen has a non-barbed stinger it can use freely, unlike regular bees which will die after losing their barbed stinger. Nevertheless, a queen can be easily handled, and even if not treated well, she will not sting a person. She reserves it for royalty only, in the event of fighting another queen bee over control of a hive.

All of the work in the hive is performed by worker bees, not the queen. The queen doesn’t produce any honey; she is the spirit and soul of the hive. All of the thousands of honey bees follow her lead. If the queen is calm, they will be calm. If and when the residents decide to swarm away, they will follow the queen. If the honey bees realize that the queen is missing, they will lose their enthusiasm and slack off in performing their important jobs. Our sages taught: Just as G‑d gives the bees a leader to follow, so, too, does G‑d provide his people righteous leaders and prophets to lead them.

Q: How can you prevent a sting near a hive? Do bees know or sense that you are there?

A: When sensing danger, worker bees emit an alarm pheromone aroma similar to ripe bananas. Whenever they sting, this pheromone is released, which attracts other bees and induces them to sting as well. This is one of the advantages to beekeepers using smoke when opening a hive; even if one bee does sting, the smoke can block the alarm pheromone.

Honey bees are not inclined to attack and are careful not to put their lives in danger; in the same vein, they’re not afraid to attack an intruder, whether a small mouse or a large black bear. After all, if they had no sting, other insects and animals would rob them of their honey—and all of their hard work. 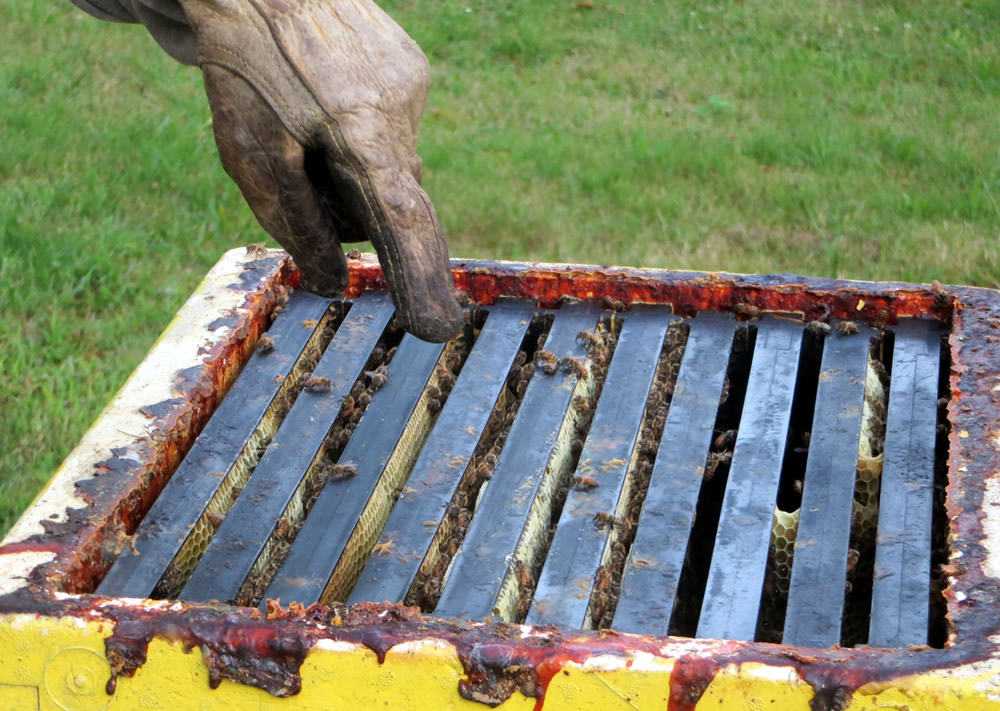 The rabbi points out some of the developing honeycomb. Photo by Carin M. Smilk.

Q: Why do some bees swarm, and what is the Jewish responsibility for them as an owner?

A: Honey bees have an instinct that causes them to swarm when their hive is too full, and Jewish law deals with the moral issue of keeping a wild swarm.

These basic laws are: (1) If someone testifies that the honey bees came from a certain individual’s hive, the finder is obligated to return them to the owner. While children are normally not fit to be legal witnesses, in this case, children may serve as witnesses to restore the bees to the beekeeper; (2) Upon finding a swarm that belongs to someone, the owner can only keep it if there are witnesses that the owner verbally expressed himself giving up on finding his bee colony; and (3) The beekeeper has the right to trespass into other people’s property to save his bees. However, he is responsible for any damage he causes. According to Rabbi Yishmael son of Rabbi Yochanan, he even has the right to cut down a branch the bees are clustered on in order to retrieve them (on condition of compensating the tree owner).

A: When the bees bring back nectar, it is deposited into cells. The bees let the nectar sit, and they fan their wings to evaporate the water content. Then they seal the cells with wax. They need honey in the winter, when no flower nectar is available and it’s too cold to leave the hive. 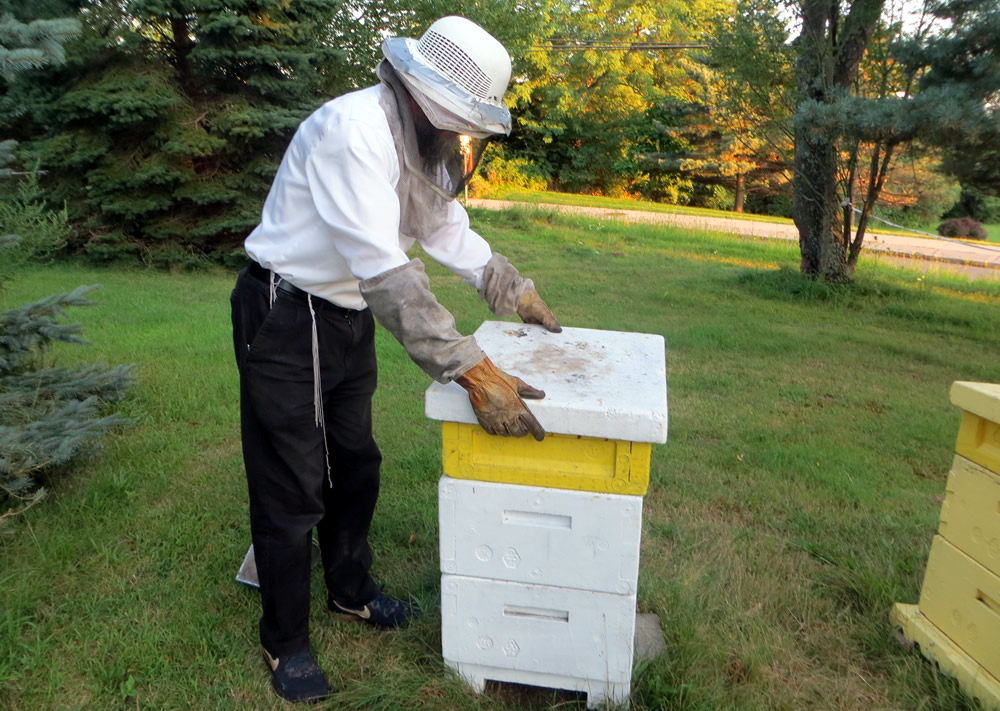 Replacing the lid on the hive, a box typically made of wood or hard Styrofoam. Photo by Carin M. Smilk.

Q: How to they maintain their habitat, and how do they survive in the off-season?

A: Bees must control the temperature inside the hive. They cannot survive below 45 degrees; they must keep a consistent temperature of 95 for the queen to lay eggs in January while it may be below zero outside. They form a ball and rotate to produce their own heat. During the summer, they have to make sure their space doesn’t get too hot. Extreme heat will cause the honeycomb of wax to melt. To cool the hive, they bring drops of water and deposit them in cells. Then they stand on two sides and will vigorously flap their wings to evaporate the water and cool the hive. They realize the importance of ventilation and providing fresh air.

Q: Those square frames that the beekeeper holds, what’s on them?

A: The final product—the capped honey! The thin wax layer sealing the honey cells must be cut off. The honey is harvested from frames that contain only honey cells without brood. A single honeybee will fly about 500 miles in her lifetime to gather nectar and pollen. Despite her hard work, only 1/12 of a honey teaspoon of honey is produced from her efforts. Multiplied by 20,0000 foragers, however, they may produce up to 100 pounds of honey each season. 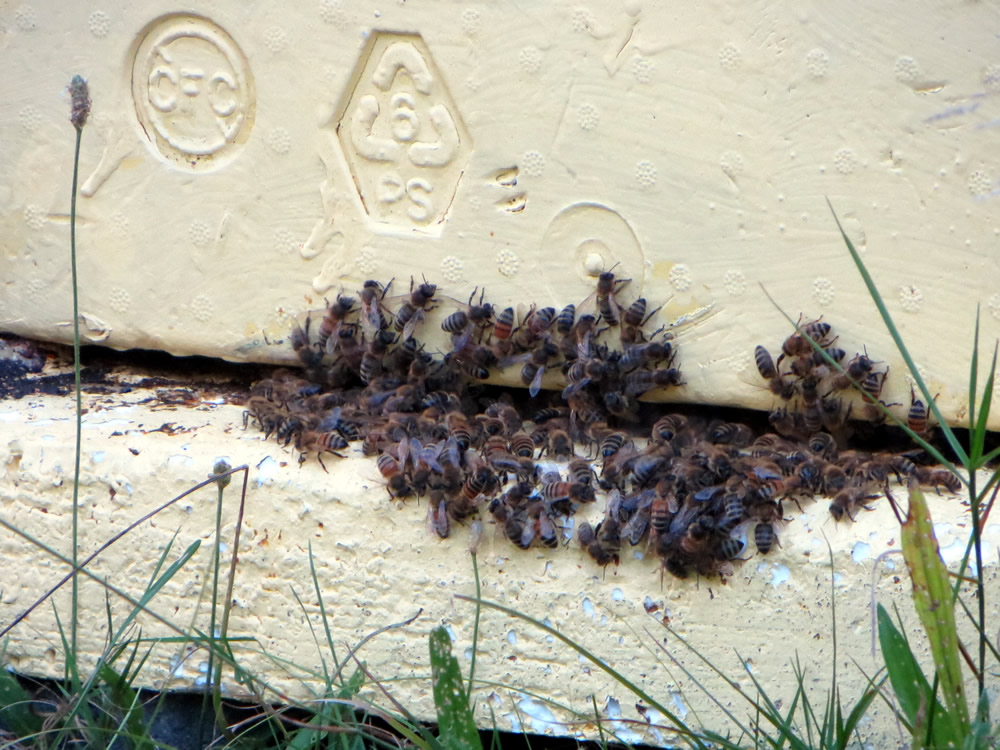 Tasks to maintain the hive are performed by the worker bees. Photo by Carin M. Smilk.

Q: What lessons do bees teach, especially in relation to the New Year?

A: Honey bees cannot survive on their own; they thrive with their communities. A colony contains about 50,000 honeybees, and there are so many different jobs. They have so much to do in their short lifespans. They know what they are capable of doing and set out to do it, united by a common goal. As a result, they don’t fight each other, but live in great harmony.

Bees gather nectar for themselves, but G‑d created them in a manner by which small pollen particles stick to their fuzzy bodies and rub off on the next flowers they visit. Honeybees know nothing about their role in benefiting flowers, trees and humans by pollinating. Individuals, on the other hand, were endowed with the wisdom to realize how they can accomplish goals in ways that benefit so many others. If bees can do it so well without planning, then people can do it even better.

This article originally appeared on Chabad.org/News.