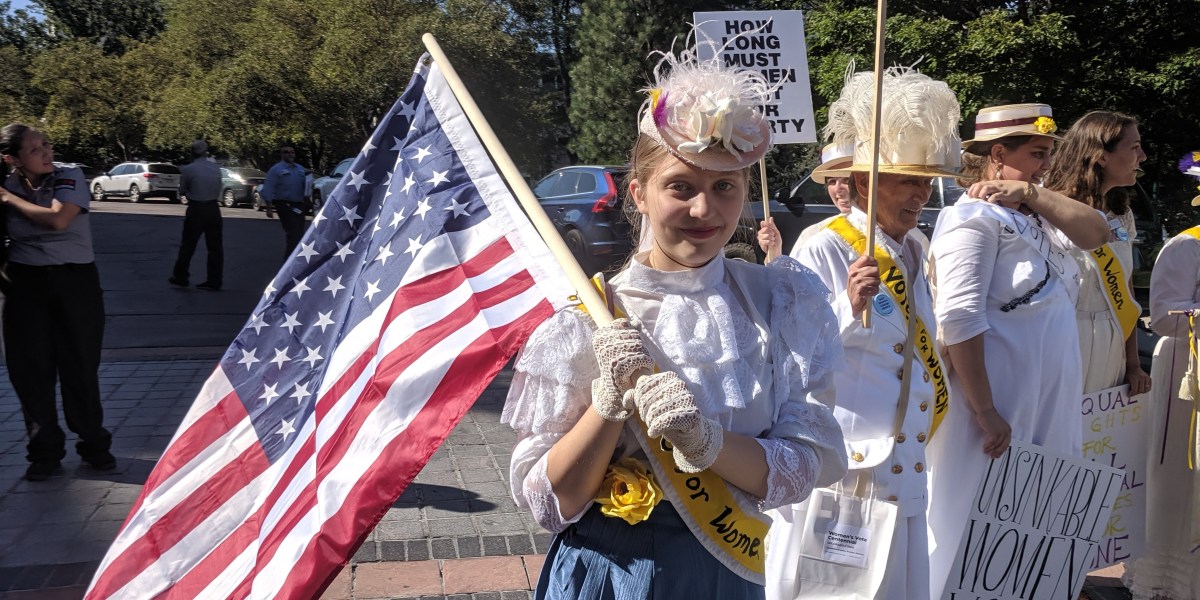 Colorado leaders kicked off a yearlong celebration of women’s suffrage Monday, leading up to next year’s 100th anniversary of the 19th amendment. But even as the state highlights its own place in suffrage history, many female politicians have their eyes on the future, and the upcoming US Senate race.

Monday’s event began with a parade across Denver’s Civic Center Park. Many wore the white dresses and golden sashes of the original suffragists. In 1893 Colorado became the second state where women could vote, and the first to award that right through a popular referendum.

“This history of allowing women the right to vote is super, super awesome and something we definitely need to honor,” said 16 year-old Emma Davis, who came in costume.

History Colorado is helping to organize the year-long effort to remember the 19th Amendment. It plans to partner with museums, libraries, and schools to explore the many legacies of the women’s suffrage movement.

The march ended on the west steps of the state Capitol, where Gov. Jared Polis noted how Colorado has led the charge for women’s political rights, including electing the nation’s first female state lawmakers, just a year after women gained the vote.

As for today, “we are one of only two states with women majority in our legislature,” Polis said.

Colorado’s House is majority female and overall, 47 of the state’s 100 lawmakers are women, among the highest rates in the country.

But Colorado has some notable missing milestones. The state is one of five, along with Idaho, Indiana, Pennsylvania, and Virginia, to never have had a female Governor or Senator. And Democrats hoping to change that record in 2020 face an uphill battle.

“There’s a lot of work left to do to break those glass barriers and elect our first Governor or Senator,” said Democratic Secretary of State Jena Griswold, currently the Colorado’s only female statewide officeholder.

Nine women have filed the papers to challenge Republican Senator Cory Gardner next year. But in the early going, male candidates have dominated the fundraising totals, and received the lion’s share of news coverage. Griswold briefly considered jumping into Senate primary earlier this summer before deciding to instead focus on her current office.

“It’s just an honor to be seen as someone who could run that type of race,” she said.

Former Governor John Hickenlooper’s entrance into the race last week has pushed the primary’s gender politics front and center. The Democratic Senatorial Campaign Committee’s swift move to endorse Hickenlooper brought out especially strong criticism from the women in the race.

Six of them co-signed a letter to the DSCC Monday demanding it rescind its “premature” nomination.

“The DSCC, by its endorsement, is implying that we should defer to a male candidate because you seem to believe he is “more electable,” the letter reads.

“What they are trying to do is play the odds and make sure that we put the person with the best name ID forward,” said Titone, “which unfortunately is Hickenlooper, who’s a guy.”

In response to the criticism, Hickenlooper’s campaign has said all candidates will have the chance to make their case to Colorado voters.