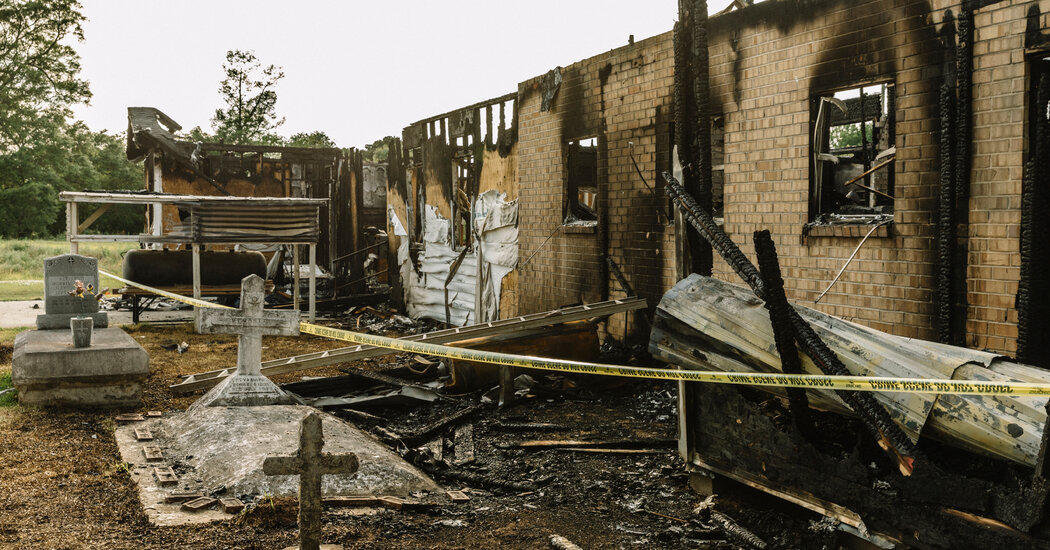 A 23-year-old Louisiana man was sentenced on Monday to 25 years in prison for setting fire to three predominantly Black churches in what federal prosecutors say was an effort to raise his profile as a “black metal” musician.

The man, Holden James Matthews, 23, who burned down the churches over a 10-day period ending on April 4, 2019, was also ordered to pay nearly $2.7 million to the churches. He pleaded guilty in federal court in February to three counts of violating the Church Arson Prevention Act and to one count of using fire to commit a felony.

Prosecutors did not mention race as a factor in the charges, but the church arsons evoked a long history of racist crimes committed across the Jim Crow South.

“These churches trace their origins to the post-Civil War Reconstruction period,” Eric S. Dreiband, assistant attorney general of the civil rights division in the Justice Department, said in a statement on Monday. “The churches survived for nearly 150 years but did not survive this defendant’s warped act of hatred.”

At his sentencing in United States District Court in Lafayette, La., Mr. Matthews addressed congregants of the churches he had burned and apologized, according to The Acadiana Advocate of Lafayette.

“There are not enough words in the English language to say how sorry I am,” the newspaper quoted Mr. Matthews as saying. “If I could go back and change it I would.”

At the sentencing, Judge Robert R. Summerhays of the Western District of Louisiana gave Mr. Matthews credit for the 18 months that he has been in custody since his arrest in April 2019, about two weeks after the third church fire, The Advocate reported.

Mr. Matthews has also pleaded guilty to six state charges in connection with the blazes, including aggravated arson of a religious building and three hate crime counts. His sentencing is pending.

Mr. Matthews has admitted that he targeted the churches because of their religious character, according to prosecutors.

Mr. Matthews has also said that he was copying similar crimes committed in Norway in the 1990s in an effort to elevate his status among the black metal community, whose most extreme practitioners have engaged in church burning, vandalism and killings. Black metal is a subgenre of heavy metal, known for its unique blend of howls, nonsyncopated blast-beat drums and cold, trebly guitars.

Mr. Matthews posted pictures and videos of the church burnings on Facebook, and discussed them with a friend online, prosecutors said. In one message to a friend, which prosecutors presented in court as evidence, Mr. Matthews mentioned a possible name for his would-be record label: “Soul Rotting Records, ‘music to burn to,’” he wrote.

Dustin Charles Talbot, a lawyer for Mr. Matthews, did not immediately return a telephone call or an email seeking comment on Monday night. In February, Mr. Talbot said that Mr. Matthews had the social and mental development of an adolescent, and that his actions were not motivated by the racial makeup of the congregations.

“Holden now fully understands the seriousness and gravity of his actions and is deeply remorseful for what he has done and the pain he has caused the congregations of these churches,” Mr. Talbot said.

Mr. Matthews was arrested after investigators determined that his debit card was used to buy a gas can that was found at the scene of one of the fires.

In April, The Advocate reported that the three churches were in various stages of reconstruction. The land had been cleared at Mount Pleasant, and the church was awaiting an inspection to begin foundation work.

Donations to help rebuild the churches poured in last year, surpassing the organizers goal of $1.8 million.